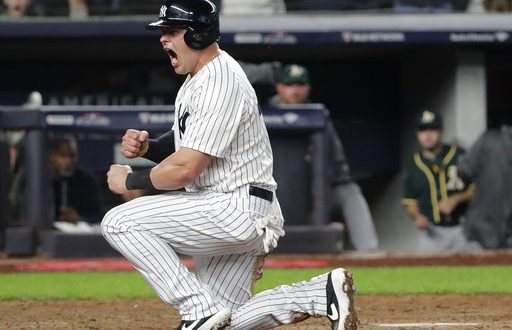 For the second year in a row, the New York Yankees have snagged the American League Wild Card. Wednesday night New York made the Oakland A’s pack up their season for good in Yankee Stadium. The final score was 7-2.

The runs started early in the first inning. One runner on first, two balls, one strike and Yankees right fielder Aaron Judge at the plate. Judge hit a 2-run homer off of Liam Hendricks to start the Yankees off.

The 2-0 score held through the next five innings.

Yankees starting pitcher, Luis Severino had gone four innings without giving up a single hit. Going into the fifth, Severino started the inning giving up two singles. This is when it looked like the A’s had a chance to make a move. With no outs, Oakland’s 2-3-4 hitters: Matt Chapman, Jed Lowrie and Khris Davis were next in line. In Yankee style, Severino got away with two flyouts and a big strike out against Davis to end the inning with the same 2-0 score.

Now to the sixth. Judge hit a leadoff double and later scored on Aaron Hick’s double making it a 3-0 game. If that wasn’t enough for Yankee fans, what came next sent fans in Yankee Stadium standing to their feet. In the Yankee’s new secret weapons’ first postseason game, Luke Voit nailed a full count, two RBI triple.

Voit was picked up by the Yankees back in late July and what he’s done since then is admirable. In 148 plate appearances, Voit hit for .333 with 14 homers and 33 RBI in 39 games. He isn’t taking any game for granted and is excited to see how the rest of the season plays out.

Down by six runs, the A’s weren’t able to put anything together until the eighth. Another homerun was hit but this time from Oakland’s left fielder, Khris Davis. The major league leader in homeruns, Davis put the A’s on the board, 6-2. This was Davis’ 49th homerun this year.

The Home Run Champ gives us a spark! #WinForHeroTown pic.twitter.com/lzQxb3iphR

The last run of the game came from the Yankees also in the eighth inning.

Going into the year with much to prove, two A’s players say they should be proud and that there’s much to look forward to next season. Hear from Matt Chapman and Khris Davis following the game:

If the A’s want to go further next season they are going to have to break their losing in postseason games streak. In both the 2012 and 2013 season, Oakland lost in Game 5 of the American League Division Series. After having a 7-3 lead in the eighth inning in the 2014 wild card game, they ended up losing it in extra innings.

Up Next for New York

For the first time since 2004, New York and Boston will face each other in postseason play. The Yankees will now go on the road to Boston to face the Red Sox in game one of the American League Division Series. First pitch at Fenway Park is scheduled for 7:32 Friday night.