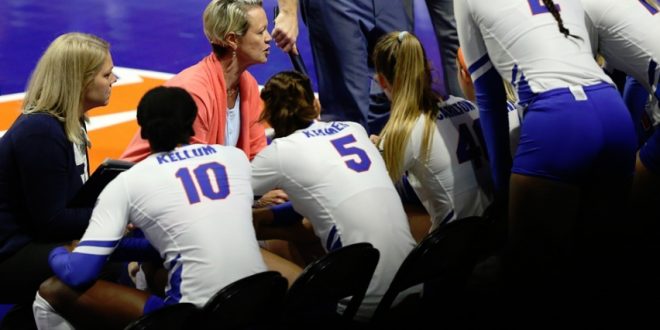 Florida is back in the O’Connell Center for a battle of unbeaten teams in the SEC.

They have yet to drop a set in the SEC. The 12 consecutive set wins is tied for the fourth-longest streak to kick off conference play under Mary Wise.

“The SEC has been really level and competitive,” right side hitter Holly Carlton said.

Florida sits in the top five in all but two statistics in-conference:

Carlton said the team is still solidifying the identity for the rest of the season. Wise said the coaching staff has seen the team grow and players get better in different areas.

“That continues to be our strength is our ability to improve,” Wise said.

Florida and Texas A&M met in both Gainesville and College Station during 2017. Florida got the best of Laura Kuhn’s squad both times with a 3-1 at home and a 3-0 win on the road.

Former Gator Carli Snyder combined for 26 kills over the two matches along with a double-double performance in their road matchup.

Wise’s squad hit near .300 and held A&M to under a .200 clips in both meetings. The first three sets in the Gainesville showdown were decided by a minimum two points.

Texas A&M is coming off two consecutive five-set matches against both Georgia and LSU. The Aggies found themselves down twice against the Tigers in what was their first true road match of the year.

Kuhn’s team could test the Gators on offense it ranks fifth in the conference in opposing hitting percentage (.177) and digs per set (14.96).

With determination and a strong will to win, the Aggies fight back to get another victory and improve to 3-0 in SEC matches. Check out these plays from our 3-2 win at LSU.#OwnIt #GigEm pic.twitter.com/7wsGLOCF9G

Here are some players to watch for A&M:

Back at It on Sunday

The Gators will turn around and face Georgia on Sunday at 1 p.m. on the SEC Network.

Quick facts on the Bulldogs: