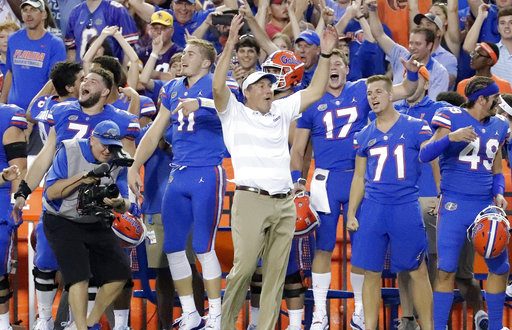 It wasn’t all pretty, but it sure does feel good.

Just look at Dan Mullen’s reaction to his team’s 27-19 win over fifth ranked LSU on Saturday. There’s no doubt that the first-year Gators’ head coach is proud of his team’s performance.

Speaking after the game, Mullen admitted that it truly was a roller coaster of a game that took place at Ben Hill Griffin Stadium.

“We get punched right in the face, and we don’t flinch,” said Mullen. “That’s something that’s huge for this team.”

The win gives the Gators four wins on the trot and three straight in the SEC. Mullen’s team will now prepare for Vanderbilt next weekend, while LSU gets set to host the number two ranked Georgia Bulldogs.

Gators come through on a day of celebration

Had Florida let this game slip, LSU would’ve completely dampened the mood in Gainesville. Tim Tebow was inducted into the program’s Ring of Honor at the end of the first quarter. The 2008 National Championship team was honored at halftime.

But it was the current crop of Gators that made sure to write the biggest story line.

After a rough start, the Gators recovered to turn in their most explosive and impressive performance of the season.

Quarterback Joe Burrow got the Tigers rolling by connecting with wide receiver Justin Jefferson for 38 yards on the very first play for their offense. That set up the first of two rushing touchdowns for running back Nick Brossette on the day.

From that point on, Todd Grantham’s defense ushered in a defensive clinic.

With the offense struggling in the first quarter, it was defensive tackle Jachai Polite‘s huge strip sack that kept the Tigers from padding their lead early.

That opened the door for the Gators offense to begin to get comfortable.

Running back Lamical Perine was sensational all game long, and he really came alive late in the second quarter. He was the catalyst for both of the Gator touchdown drives before the half.

Mullen and the Gators offense impressed by continuing to show their versatility. Whether it was a read-option play, a wildcat set or a trick play, there were few things that Mullen didn’t pull out from under his sleeve.

After the game he talked about some of the adjustments his team needed to make during the game.

The Gators went into the locker room with the lead, but LSU came out strong again after the interval.

This time it was the Gators that let Ed Orgeron’s team back into the game when quarterback Feleipe Franks threw a very poor red-zone interception early in the third quarter.

Mullen’s offense sputtered in that period, and Burrow began to regain some rhythm. He scrambled well all game in the face of Florida’s tenacious defensive front; his steadiness set the tone for a couple breakout runs from Brossette in the fourth quarter.

The senior rusher turned what was to that point, a poor day, into nearly a game-winning performance. He gashed the Gators defense for 31 yards, and again for 47, before pounding it in from close to give the Tigers a lead on the road.

During that period, it seemed like the Gators offense was going to crumble at home the same way they did against Kentucky. But when they most needed points, Mullen again turned to his bag of tricks.

After Franks drove the ball down the field with his arm, and his legs, the quarterback turned receiver to set Florida up with a first-and-goal situation.

While Kadarius Toney‘s touchdown pass sealed the win for Florida last week, this time it was tight end Lukas Krull that was called on to deliver the dime.

Perine pounded it in once again from the two-yard line, and the Gators would never relinquish this lead. Safety Brad Stewart Jr. then put the cherry on top with an interception return for a touchdown in the closing minutes.

The loss comes as a big one for LSU. The road only gets tougher as they host number two Georgia next week, and the Tigers still have to play top rated Alabama.  Florida will now prepare for another SEC bout with Vanderbilt on Saturday.

For Mullen, his players and the Gator Nation, the win goes down as an early statement in his tenure.

Sports media and management student at the University of Florida. Content creator for ESPN 98.1 FM/ 850 AM WRUF.
@TheEdgarChavero
Previous Florida to honor 2008 National Championship team against LSU
Next Gators Defense Impresses in Win Over LSU