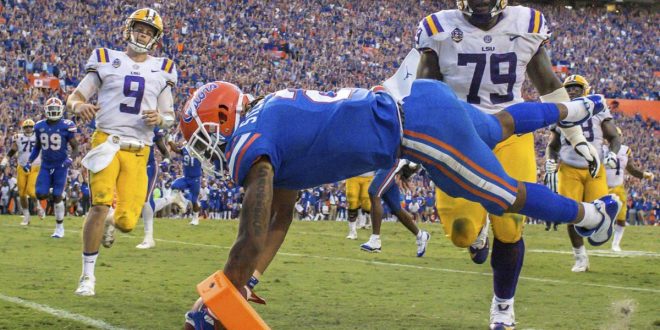 The Swamp will remember Brad Stewart and his major play at the end of the LSU-Florida game Saturday. It was this play that solidified the Gators’ 27-19 win over the number five Tigers.

With just one point between the teams in the 4th quarter, LSU quarterback Joe Burrow threw the ball downfield but Stewart stepped in to pick it off and bust a pick six.  The Swamp went nuts.

“I was super excited because I knew the game was about to be over,” Stewart said. “What I should have done was take a knee so we wouldn’t have to go back on the field.”

It was the Louisiana native’s first pick six of the season and it was the first interception thrown by Burrow all season.

Relive the play over and over right here:

It wasn’t just Stewart who lit it up on the field Saturday. Gators defensive back Donovan Stiner also had a late interception to seal the deal for the Gators. It seems the debate between LSU and Florida over who has the real DBU is over. It’s not hard to see who won that battle.

It was also a big night for linebacker Vosean Joseph who had a career game. He had 12 tackles, three tackles for loss, two sacks and four solo tackles. Joseph was also the one to blame for the unsportsmanlike conduct call on Stewart’s pick-six. He kicked it to the stands in celebration, but for good reason.

“He was paying homage to the 2008 team,” Gators head coach Dan Mullen said.

Joseph said he wanted to punt the ball to the stands as Brandon Spikes did after a pick-six in their LSU game in 2008.

Mullen didn’t seem to mind it too much as the defense worked hard to make crucial plays Saturday. Now, it’s all about moving forward and looking ahead to their next opponent; the Vanderbilt Commodores.

“Proud of our guys. We came out and battled today and we keep finding ways to win some football games,” Mullen said. “Huge win for us. Huge win for us. Moving forward we go back on the road this week and then if I’m not mistaken, we don’t leave the state of Florida the rest of the season.”

Courtney Mims is a junior telecommunications major at the University of Florida. She enjoys covering all Gator sports and drinking gallons of Starbucks coffee while doing so.
Previous Florida Gators Football Recap: Florida downs LSU 27-19 at home
Next No. 11 Gator Volleyball Pushed to Brink at Home