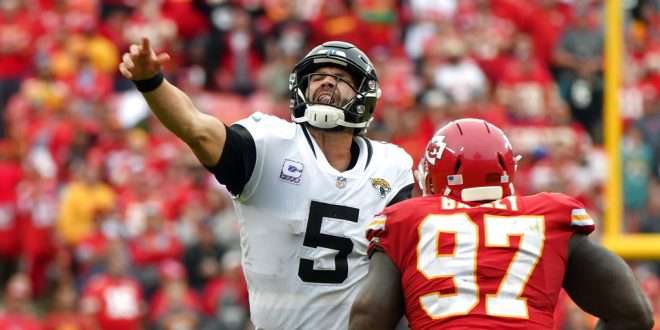 On a wet, muggy Sunday at Arrowhead Stadium, the Jacksonville Jaguars looked sluggish in a loss to the Kansas City Chiefs.

The red-hot Chiefs dominated Jacksonville on both sides of the ball, poundings the Jaguars 30-14. They moved the ball with ease against the NFL’s top-ranked defense, while the defense forced five turnovers on the day.

The Chiefs clicked on offense from their first drive. After the defense forced a Jaguars punt, Chiefs quarterback Patrick Mahomes led a 10-play, 73-yard drive that ended in a Mahomes rushing touchdown to give the Chiefs the early lead.

On the other hand, the Jaguars could not get anything going offensively.

After an interception gave the Jaguars some momentum, Jacksonville quarterback Blake Bortles coughed up the ball after being sacked in the second quarter by linebacker Dee Ford.

After the defense held the Chiefs to a field goal, the offense gave up the ball again.

On the first play of the drive, Bortles threw an interception to defensive end Chris Jones. Jones proceeded to rumble his way to the end zone to make the score 20-0.

The Jaguars had a chance to salvage a terrible first half on their final drive. Bortles led Jacksonville to the Chiefs’ three-yard line with 20 seconds left in the half, but the Jaguars again turned the ball over after a deflected pass led to another interception.

In the second half, the Jaguars were finally able to get on the board.

Bortles hit running back T.J. Yeldon for a 14-yard touchdown pass late in the third quarter.

The Jaguars scored again in the fourth quarter off a 21-yard touchdown run by Bortles.

However, the two scores were not nearly enough, as Bortles threw two more interceptions in the second half while Kansas City scored another touchdown and a field goal.

Bortles threw for 430 yards on the day while completing 33 of 61 pass attempts. He did score two touchdowns, but his four interceptions and the lost fumble killed the Jaguars’ offensive momentum.

Bortles understood the magnitude of his struggles but will still focus on taking the game one quarter at a time.

For the Chiefs, Mahomes struggled as well.

The young quarterback threw two interceptions while completing 22 of 33 passes for 313 yards.

However, running back Kareem Hunt picked up the slack, rushing for 87 yards and a touchdown.

The Jaguars will travel to Dallas to take on the Cowboys next Sunday at 4:25 p.m.

The Chiefs will travel to New England to take on the Patriots for the Sunday Night Football matchup.

Jonathan is a sports journalism student at the University of Florida. He enjoys videography, editing, photography, and writing.
Previous Dolphins Blow 17-Point Lead in Loss to Bengals
Next Indians Attempt to Avoid Sweep by Astros