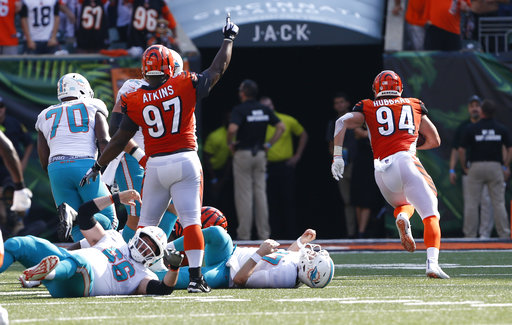 Despite numerous injuries, the Miami Dolphins took a 17-0 lead late in the third quarter on the road against the Cincinnati Bengals. Then, the Dolphins “Dolphined.” Miami let Cincinnati score 27 unanswered points, with 24 of those points coming in the fourth quarter alone. The Dolphins suffered their second straight embarrassing road loss as they fell 27-17 to the Bengals on Sunday.

Following the lackluster performance against the Patriots just a week ago, not many people expected the Dolphins to go into Cincinnati and beat the top team in the AFC North. However, they were able to be completive to start, despite some troubles. The Dolphin offense struggled for most of the afternoon, with Tannehill failing to get into any real rhythm. It was the Dolphin defense, without star defensive end Cameron Wake, that stepped up and kept the Fins in the game.

After a scoreless first quarter, the Dolphins finally got some points on the board with a 22-yard pass to running back Kenyan Drake for a touchdown. This score concluded an 11 play, 95-yard drive lasting over six minutes.

Before the end of the half, wide receiver Jakeem Grant took the Cincinnati punt 71 yards to the end zone, putting the Dolphins up 14-0 going into the half.

A sack from Dolphins defensive linemen Jerome Baker ended the Bengals’ opening drive of the second half. On the ensuing Dolphins possession, starting at their own 48-yard line, kicker Jason Sanders made a 42-yard field goal to give Miami a commanding 17-0 lead.

This would be the final highlight for the Dolphins on Sunday afternoon. Miami completely collapsed and the Bengals pounced on the opportunity. The comeback started with the Bengals converting a field goal of their own on the following drive. Kicker Randy Bullock made a 51-yard field goal to make it a two-possession game.

On the next Bengals drive, quarterback Andy Dalton connected with running back Joe Mixon for an 18-yard touchdown pass. This score put the Bengals within one score.

The Dolphins tried to respond to the Bengals surge in momentum, but it didn’t go according to plan. In fact, the play, in general, was odd. Tannehill was feeling the rush from the Bengals. As the pocket collapsed around him, Tannehill tried to throw it at the line to avoid the sack. It knocked off the line and into the hands of defensive end Michael Johnson who went untouched into the end zone for the pick six. This tied the game at 17.

Tannehill said he had no idea what happened on the play.

Another Dolphins punt led to the Bengals taking the lead for good with a 20-yard field goal from Bullock. Then, the Bengal defense added insult to injury for the Dolphins. In an attempt to tie or take the lead, Tannehill was sacked by former Florida Gator Carlos Dunlap, causing a fumble. The fumble was recovered by Bengals defensive linemen Sam Hubbard and taken into the end zone to bring the Bengals in front 27-17.

Two weeks ago, the Dolphins were undefeated and sitting at the top of the AFC East. After two gut-wrenching losses, they now sit in second place and fading fast. The latest instance of the Dolphins floundering can be traced back to injuries. They were without Wake, cornerback Bobby McCain, defensive end Andre Branch and wide receiver DeVante Parker.

During the game, starting offensive linemen Laremy Tunsil suffered a concussion and left the game. He was replaced by Sam Young at left tackle, where a drop in production was evident. This led to the Dolphins struggles on offense to get from bad to worse.

Laremy Tunsil is being evaluated for a concussion. His return is questionable.

It doesn’t get any easier for the Dolphins. They return home next week to host one of the hottest teams in the NFL, the Chicago Bears. The Bengals host their division rivals, the Pittsburg Steelers, on Sunday.