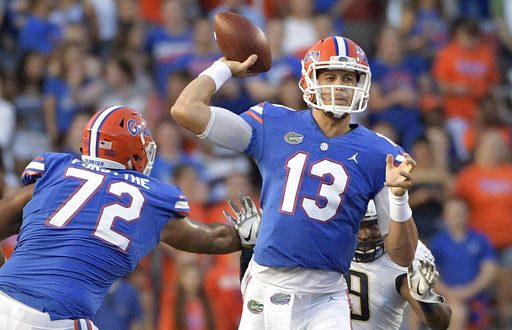 FILE - In this Sept. 1, 2018 file photo Florida quarterback Feleipe Franks (13) throws a pass as offensive lineman Stone Forsythe (72) blocks Charleston Southern defensive lineman Jonathan Glover II during the first half of an NCAA college football game in Gainesville, Fla. Franks finally got to see how a jump pass is supposed to look. Franks scrolled through his phone after the team’s season opener and realized he needed to check out two of Tim Tebow’s most memorable passes. Tebow completed two jump passes for touchdowns in his college career with the Gators. The first came in a victory against LSU in 2006 and the other helped beat Oklahoma in the 2008 Bowl Championship Series title game. Franks says "they both looked smooth" on Monday, Sept. 3, 2018. (AP Photo/Phelan M. Ebenhack, file)

With a defensive dominant game Saturday, the Florida Gators offense continues to try and better their performance. The Gators came out with three touchdown drives and the big play to end the game. Besides that, lots of punting.

Gators Offensive Coordinator John Hevesy spoke after practice Tuesday night about the growth that still needs to be made.

Two key players in Saturday’s game were Lamical Perine and Jordan Scarlett, fading off of each other. Perine had 85 yards and added two scores on the ground for the Gators, while Scarlett had 14 carries for 65 yards.

Set out from a season-ending knee injury last season and a hand injury sometime between week 4 and 5, Brett Heggie’s snap count nearly went up five times in the game against the Tigers. He even played one-handed with a big cast still on his hand on Saturday.

Hevesy discusses how the display of Heggie’s ability at practice has allowed him to get more snaps in the game.

Hevesy laughed when he talked about “creative skills.” Every play might not be named “Kodak” or “Sinatra,” but the offense still has a few tricks up their sleeve. They are looking to keep their core plays and continue to adjust to the defense they are facing.

“We practice the deceptive plays for two or three weeks so the kids are comfortable just like an inside zone play, counterplay, or outside zone. It’s not this is this play, it’s here is the play and let’s run it,” Hevesy said.

Hevesy wants the offense to continue to build confidence on the plays they are running in practice to ensure they are being carried out correctly in games.

The Gators are now headed to Nashville, Tennessee to take on the 3-3 Vanderbilt Commodores.