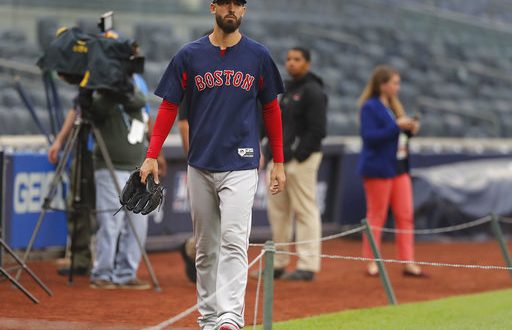 The divide of the New York Yankees and Boston Red Sox is a famous one; the best-of-five series split at 1-1 resembles just that.

Monday’s game-winner will take away more than the series lead. Breaking the tie grants the winner confidence heading into what could be the final game of the 2018 American League division series.

Right-handed pitcher Luis Severino will take the mound for the Yankees. Severino holds a 0.0 postseason ERA after pitching four innings where he had seven strikeouts and gave up no runs. He said bringing the series home is motivating.

For a second game in a row, the Yankees will start without injured center fielder Aaron Hicks. Hicks was questionable in starting Monday but failed to make the lineup due to a tight hamstring.

The Red Sox also made changes to its lineup: Steve Pearce, Brock Holt and Rafael Davis will move to the infield to replace Eduardo Nunez, Mitch Moreland and Ian Kinsler, according to ESPN.

Boston pitcher Matt Barnes said he thinks the Red Sox can pull out a win despite the atmosphere in New York.

But Barnes won’t take the mound and neither will David Price gave up three runs before being pulled in the second inning. Price who has a 6.03 earned run average in postseason starts tacked on his 10th “L” in the postseason.  The Red Sox will start Nathan Eovaldi (3.81 regular-season ERA) instead.

In 3 starts against the Yankees since being acquired by the #RedSox, Eovaldi has allowed 0 ER (1 unearned run). pic.twitter.com/cAW2EexPbD

The Yankees have their heads held high coming off a 6-2 win in game two as they return to the Bronx for games 3 and 4.

Aaron Boone said the catcher’s performance in front of the plate was expected of him.

Kate Venezio is a fourth-year telecommunication-news student at the University of Florida. Kate does it all: Behind the camera she captures emotional moments as a photographer for the University of Florida Athletic Association. She's comfortable being in front of the camera, too. Kate interviews players, coaches, fans and family members for pre- and post-game coverage as a beat reporter for ESPN Gainesville/WRUF-FM. In addition, Kate produces the sports segment for the weekly WUFT News program. There, she's responsible for writing the script in its entirety to include production commands. The presentation includes video highlights and interviews taped and edited, and Kate then live anchors the final package on a daily deadline. In addition, she writes stories for wruf.com where she informs sports fans of local, state, and national trending topics. Kate also utilizes social media as a tool to help get the stories in front of viewers.
@@kate_venezio
Previous Florida Gators Looking to Improve Offensive Ability
Next Friday Night Lights: Trinity Catholic Battles Santa Fe