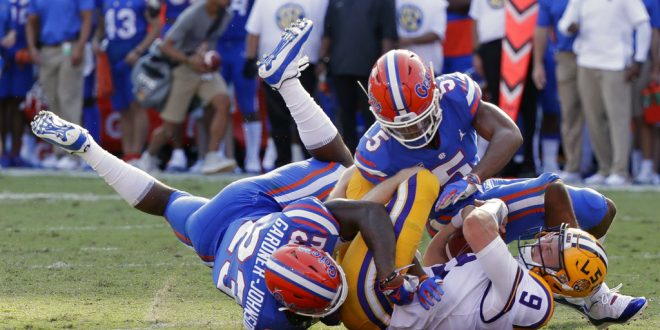 LSU quarterback Joe Burrow (9) is tackled by Florida defensive back Chauncey Gardner-Johnson (23) and defensive back CJ Henderson, right, after running for a first down during the first half of an NCAA college football game, Saturday, Oct. 6, 2018, in Gainesville, Fla. (AP Photo/John Raoux)

While Tim Tebow and the 2008 national championship team reunion were big highlights of the day, the Florida Gators defense made sure to put a bow on it and their impressive performance against rival LSU. Florida defensive coordinator Todd Grantham could even be seen celebrating toward the end of the game.

The Gators had just beaten the fifth-ranked Tigers after all. Grantham’s squad intercepted the ball twice to help Florida get there. The crowd at the Swamp was going insane.

All the more reason to celebrate.

Grantham On Closing Out Games

Florida’s back-and-forth, tug-of-war victory over LSU was hard earned and came down to a few key plays toward the end. The Gators won 27-19 behind a solid run game and a stingy defense that sacked Tigers quarterback Joe Burrow five times last Saturday. Grantham talked about closing out games, particularly this one, and how it gives them confidence.

The defense helped close out this one, starting with defensive back Brad Stewart Jr.‘s interception and 25-yard return to extend the Gators’ lead late in the fourth quarter. Then, safety Donovan Stiner intercepted Burrow’s pass to slam the door shut and send the Gators to their fourth straight win.

Grantham touched on the defense making plays to close out games versus being responsible and understanding the margin for error.

Aside from the two interceptions, the Gators had 11 tackles for loss and a fumble recovery, courtesy of defensive tackle Kyree Campbell. The sophomore lineman recovered the ball following Jachai Polite‘s sack on Burrow about halfway through the first quarter. He’s someone who works at his craft and brings a certain physicality to that position, Grantham said.

Through four games he’s been eligible to play in this season, Campbell has 14 total tackles and zero sacks.

The offense ran up the score through the first four games, but the defense has taken a bit more of the spotlight the past two games. First, it was the Gators holding ranked Mississippi State to 202 total yards (including just 98 through the air) in a 13-6 victory in Starkville. Next, it’s the Gators’ most recent performance against LSU.

Though Florida allowed nearly double the amount of yards last Saturday, the Gators forced three turnovers against the Tigers. And two of those proved to be costly.