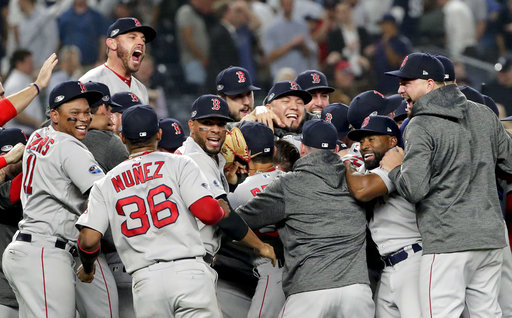 In Game 4 of the ALDS, the Boston Red Sox took down the New York Yankees by a score of 4-3.

All Boston Early On

The Red Sox led the whole way, but they did most of their work early on in Game 4. They had 6 of their 8 hits in the first four innings of the game. Boston had a fantastic third inning, scoring three runs. Eduardo Nunez and Ian Kinsler had huge back-to-back hits in the inning with two outs. Kinsler had an RBI double, and then Núñez’s single brought Kinsler home for the score.

The Red Sox tacked on their fourth run in the next frame when Christian Vazquez sent a solo shot to right field.

Drama in the Ninth

The Red Sox cruised into the 9th inning with very little resistance. The score was 4-1, and the Yankees had just four hits going into the inning. New York hadn’t put a runner on base since the fifth inning. After great relief performances by Matt Barnes, Ryan Brasier and Chris Sale, closer Craig Kimbrel came in for the save. That’s where things got dramatic.

Kimbrel gave up two walks and one hit with his first four batters to load the bases, although he did strike out Yankees’ star Giancarlo Stanton. Kimbrel then hit Neil Walker, bringing the score to 4-2. The next batter was Gary Sanchez, who almost changed the entire game with a sac fly that was a couple feet away from being a walk-off grand slam. The final play of the game was one of the best of the postseason so far as Eduardo Núñez threw a ground ball to Steve Pearce to clinch the win for Boston.

Craig Kimbrel had some comments about the “nerve-wracking” 9th inning:

The Red Sox are a complete team who have had an excellent season thus far. Boston will try to take the momentum from this series win into the ALCS, where they will take on the defending champion Houston Astros. But before turning their attention to Houston, the team took some time to celebrate the win against their rival.

Boston manager Alex Cora spoke to the media about his team’s win:

The Red Sox have home-field advantage against the Astros in the American League Championship Series. Game 1 of the series is on October 13th at 8:09 p.m. ET from Fenway Park.