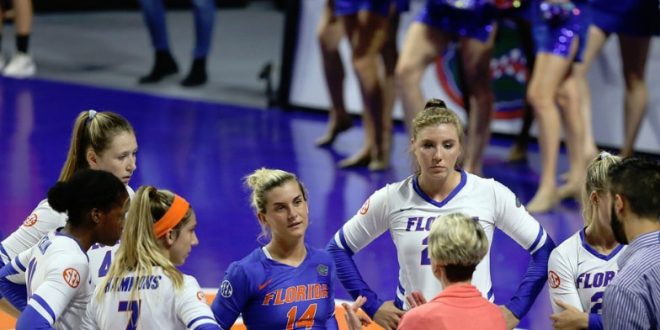 Mary Wise’s team is now on a 12-game winning streak thanks to the victory. Florida is also 7-0 in conference play for the 21st time under Wise.

Wise said it was big to get a win in the hostile environment that is the Carolina Volleyball Center.

“This is not an easy place to do anything,” she said.

South Carolina native Thayer Hall showed out in her return to the state she calls home.

She paced the Gator offense with 16 kills and recorded a team-high 17.5 points on the match. Although, the 16 kills did have to come on over 30 swings.

The once-Gamecock dished out 24 assists and dug 14 balls in the Friday-night match.

Holly Carlton registered another double-digit kill match with 13 kills on 29 attempts with a hitting efficiency of .379.

Rachael Kramer was just one block registered away from a double-double of her own. She finished the match with 11 kills and was credited with nine blocks.

It came to that due to the Gamecocks fighting back to even the match after Florida jumped out to a 2-0 set lead.

“That’s three in a row that could’ve gone the other way,” Wise said. “Credit to our players for having that perseverance. Could not be more proud of our team and how they responded.”

She praised her team for coming out in the fifth set and performing against a Gamecock team she stated was playing “lights out” at that point.

Florida will be back in the O’Connell Center Sunday night against the Alabama Crimson Tide.