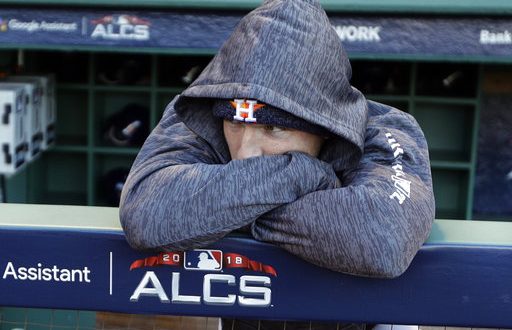 Arguably the two best teams in baseball are now going to clash in the American League Championship Series.

When the Boston Red Sox (108-54) and Houston Astros (103-59) meet in the ALCS, two heavyweight teams will play for the chance to represent the AL in the World Series.

The Red Sox might’ve had the best record throughout the regular season, but it’s the reigning champions that fully come in as the favorites in this series.

Here’s how both teams stack up side-by-side.

AJ Hinch and Game 1 starter Justin Verlander address the media ahead of the ALCS. https://t.co/z57ShpyoGi

The biggest difference for the Astros this season has been the offseason acquisition of Gerrit Cole. The burly right-hander hasn’t disappointed in his first season in “H-Town.”

The addition of Cole transformed a strong rotation into a stellar one. Cole went 15-5 this season with a 2.88 ERA, and he’ll face off against the struggling David Price in Game 2.

Here’s where the Astros might be able to do some damage. Justin Verlander and Chris Sale are set for a pitcher’s duel in Game 1 at Fenway Park. Trying to predict which ace will oust the other would be like flipping a coin.

Sale spoke about going head-to-head against Verlander on Friday:

While Price pitched well against the Astros this season, 1-0 in 2 starts with 17 strikeouts in 12.1 innings, the veteran’s postseason struggles have been well documented.

Price owns a 2-9 record with an ERA north of five in 10 postseason starts (18 appearances). He lasted only 1.2 innings against the Yankees in Game 2 of the ALDS.

Price is well overdue for a good postseason performance. But if he can’t get the job done again, that puts a lot of pressure on the likes of Sale, Rick Porcello and Nathan Eovaldi.

Once again, how far the Red Sox go this postseason may hinge on the performances of their $217-million-dollar man.

These are two of the best, if not the two best, offensive teams in baseball. There’s no other way to put it. The reason why the Red Sox might outproduce the Astros is simply because they have home-field advantage.

The Sox scored a league-high 5.72 runs per game at home in the regular season. They also hit .286 at Fenway, compared to .255 away from “Beantown.”

Astros’ Manager A.J. Hinch spoke about the importance of having success on the road on Friday:

The Astros are going to score plenty of runs themselves, but the Sox showed against the Yankees that they can beat teams in many different ways.

They scored 16 runs against the Yankees in Game 2 with only five of their 18 hits going for extra bases.

Mookie Betts and J.D. Martinez haven’t disappointed thus far. The first-base platoon of Steve Pearce and Mitch Moreland has worked well. The bottom of their order, usually known for their weak hitting, has also sparked a few rallies this postseason.

But the Astros’ bats have also entered another gear. George Springer had homered in four straight games dating back to last postseason. His streak snapped in Game 2 of the ALDS against the Indians, so Springer hit another two homers in Game 3 to close them out.

It’s no surprise that these are the top two clubs in runs scored this postseason too. Both sets of pitchers are going to have plenty of trouble keeping both lineups in check.

In this department, the Astros might be clear winners. A.J. Hinch had the luxury of phoning the number one bullpen in baseball this regular season.

This season, Roberto Osuna survived a 75-game suspension for domestic abuse allegations and a mid-season trade from the Toronto Blue Jays to become the team’s closer.

Relievers Ryan Pressly and Will Harris have been sturdy for Hinch this season. Lance McCullers Jr. has also made a difference out of the bullpen. The manager even spoke about how important Pressly would be in this series.

Meanwhile, Alex Cora has had to hold his breath when he calls upon his relievers. Brandon Workman, Joe Kelly, Ryan Brasier and even closer Craig Kimbrel all had their tense moments in the ALDS against the Yankees.

It speaks volumes that Alex Cora had to call upon his starters in the eighth inning twice: Porcello in Game 1 and Sale in Game 4. The former Astros bullpen coach might have to do just the same thing in this best of seven series.

Frankly, baseball fans have been dreaming for a collision from the top two teams in the AL all season. Now they’ve got it.

While both team’s rosters are nearly ideal, Houston’s more so, the series may be decided by which manager can out-manage the other.

It’ll be great to watch Alex Cora staring down against the very same team he took home the World Series with last season.