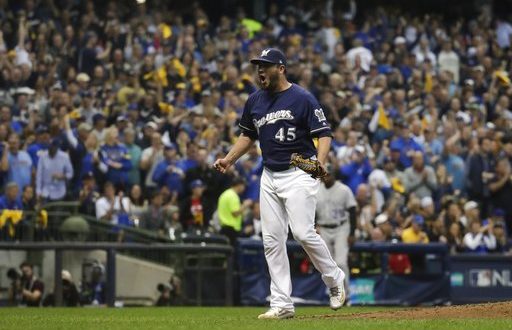 The Milwaukee Brewers and Los Angeles Dodgers couldn’t be more neck-and-neck heading into Game 3. Not only is the series tied at one game apiece, but in each game, the winning team has only won by one run. On Friday,

the Brewers snatched the first win 6-5. On Saturday, the Dodgers gave it right back to them, scoring four runs compared the Brewers’ three.

The series shifts to the West Coast for Game 3 Monday.

Jhoulys Chacin (15-8, 3.50 ERA) will take the mound for the Brewers. The right-hander pitched five scoreless innings against the Colorado Rockies in the National League Division Series.

.@Jhoulys45 takes the hill for the #Brewers in game 3 of the #NLCS with this lineup behind him. #OurCrewOurOctober pic.twitter.com/pHfXAR7GrQ

Craig Counsell, Brewers Manager, said they have to take it game by game.

Either the Brewers or the Dodgers will take the series lead Monday night. Counsell said the pitching line-up isn’t set in stone.

The Dodgers will bring the game home to Dodger Stadium. The Dodgers will start Walker Buehler (8-5, 2.68 ERA in 2018). In Game 3 of the Division Series against the Braves, Buehler walked the pitcher and gave up a grand slam to Ronald Acuna Jr. within nine pitches of each other, according to MSN Sports. In the regular season, Buehler close with a 1.55 ERA over his last 12 starts.

It will only be Buehler’s second time facing the Brewers. In July, he gave up one run in seven innings, although Milwaukee pulled out the 1-0 win.

“I think our (relievers) are taking it personal, as a challenge, because our guys are pretty good back there, too,” Dodgers manager Dave Roberts said. “And so there’s not a whole lot said about them. But without those guys, we wouldn’t be in this position,” according to MSN.com

The Dodgers will start Rich Hill in Game 4.

Kate Venezio is a fourth-year telecommunication-news student at the University of Florida. Kate does it all: Behind the camera she captures emotional moments as a photographer for the University of Florida Athletic Association. She's comfortable being in front of the camera, too. Kate interviews players, coaches, fans and family members for pre- and post-game coverage as a beat reporter for ESPN Gainesville/WRUF-FM. In addition, Kate produces the sports segment for the weekly WUFT News program. There, she's responsible for writing the script in its entirety to include production commands. The presentation includes video highlights and interviews taped and edited, and Kate then live anchors the final package on a daily deadline. In addition, she writes stories for wruf.com where she informs sports fans of local, state, and national trending topics. Kate also utilizes social media as a tool to help get the stories in front of viewers.
@@kate_venezio
Previous Monday Night Football Preview
Next Brewers take 2-1 lead in NLCS after Game 3 win over Dodgers