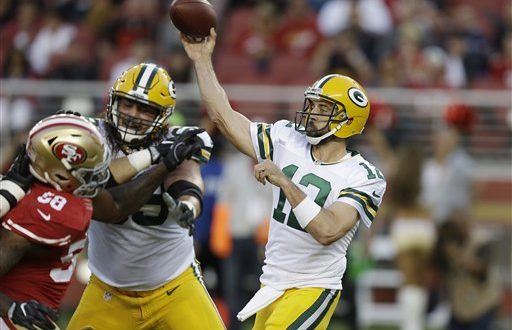 The San Francisco 49ers look to break their three-game losing streak as they travel to Green Bay to take on Aaron Rodgers and the Packers on Monday Night.

The San Francisco 49ers are in the midst of a mediocre season plagued with injuries and a problematic turnover ratio.

One of the most notable injuries for the 49ers came in Week 3 when quarterback Jimmy Garoppolo tore his ACL against the Kansas City Chiefs. In the 49er’s last game, against the Arizona Cardinals, running back Matt Breida and wide receiver Pierre Garcon left the game with injuries.

According to 49ers head coach Mike Shanahan, injuries have been the biggest challenge for San Francisco this season.

Despite injuries, quarterback C.J. Beathard and the 49ers offense have been average but struggles with turnovers. In the 49ers 26-16 loss against the Cardinals, the team recorded five turnovers, including two interceptions.

JUST IN: The San Francisco #49ers commit five turnovers in a 28-18 loss to the previously winless Arizona #Cardinals. https://t.co/WknXZ5BHhv

The 49er’s defense has an opportunity to capitalize on the questionable mobility of Green Bay quarterback Aaron Rodgers. San Francisco’s defense has been average defending against the pass, ranking 15th in the league for passing yards allowed.

A notable matchup for tonight’s game will be against Rodgers and San Francisco cornerback Richard Sherman.

Sherman has played seven times against Rodgers and knows the quarterback’s ability to make a play. In those seven meetings, Rodgers has completed nine passes against Sherman.

Richard Sherman on facing @AaronRodgers12 on #MNF “You gotta be ready for the backyard football. He’s a great passer and can get the ball anywhere. He can be on his back foot and throw it 75 yards if that’s really what he wanted to do.” #GoNiners #GoPackGo @nflnetwork pic.twitter.com/owOVggiyM3

The only win for the 49ers came in Week 2 against the Detroit Lions.

The Green Bay Packers have been unpredictable this season with huge wins over the Chicago Bears and Buffalo Bills and tough losses to the Detroit Lions and the Washington Redskins.

The biggest question for the Packers is the status of Rodgers’ knee injury.

Rodgers injured his knee during the Packer’s season opener against the Chicago Bears on Sept. 9. Despite leaving the game, Rodgers returned to lead the Packers from a 20-0 deficit to defeat the Bears 24-23.

Rodgers has seen improvement to his knee injury, but stated that he suffered a setback with his injury last week.

Despite the abilities of Rodgers and the success of the Packers’ passing game the Green Bay offense has struggled to convert on third downs. The Packers are currently 29 for 69 on third down conversions.

The Packers defense has been successful defending against the passing game and hopes to capitalize off of the 49er’s high turnover ratio.

Green Bay hopes to turn around their 2-2-1 season with a win over the 49ers.