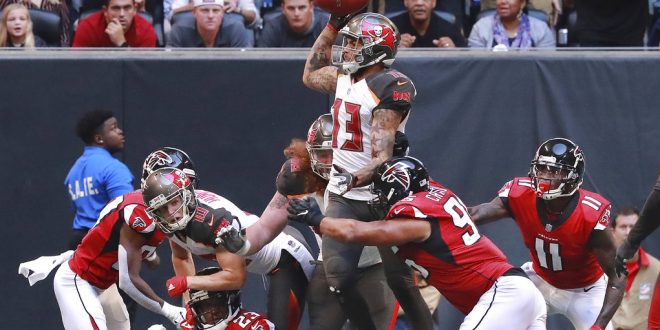 After a strong 2-0 start, the Tampa Bay Buccaneers have been reeling as of late. The Bucs needed a win to stop their two-game losing streak and prove that they are playoff contenders.

The Buccaneers had their chance against their NFC South rival Atlanta Falcons.

In the end, however, The Buccaneers could not get the job done, losing  34-29 to Atlanta for their third-straight loss.

It was a tough loss but hard fought all the way. #GoBucs | #TBvsATL pic.twitter.com/t06DD7tUe7

The Buccaneers started the game strong, driving 75 yards downfield to score a touchdown. In Jameis Winston‘s first game back as the starter, he hit Cameron Brate in the end zone for a 15-yard touchdown strike.

However, a missed PAT by Tampa kicker Chandler Catanzaro slowed the Buccaneers’ momentum. The Bucs struggled to find the end zone in the ensuing drives, while the Falcons scored three touchdowns on their first three drives of the game.

With the score 21-6, Tampa had a chance to cut the Atlanta lead, but an overthrown deep ball by Winston led to an interception.

However, Winston redeemed himself on the next drive, hitting O.J. Howard in the endzone with 26 seconds left in the first half.

Jameis finds O.J. for the TD!

The Falcons again responded, driving into field goal range in 25 seconds to set up a Matt Bryant field goal. With the score 24-13 to start the 2nd half, the Tampa defense forced a punt on Atalanta’s first drive. The Buccaneers then drove the ball to the Atlanta seven-yard line where they had a chance to turn the momentum.

However, Winston threw another costly pick after his pass was deflected and intercepted in the end zone by Brian Poole.

The Buccaneers defense came up big again, holding the Falcon’s defense in check for their next two drives, while a field goal by Catanzaro made the score 24-16 going into the fourth quarter.

Winston hits Godwin to bring us within 2!

A failed two-point conversion kept the score at 24-22, but the Falcons responded with a touchdown of their own — a six-yard touchdown pass from Matt Ryan to Tevin Coleman.

Tampa came firing back, with Winston hitting Peyton Barber in the end zone for his fourth touchdown pass of the day.

Peyton Barber hauls one in for the TD.

Tampa’s defense held the Falcons to a field goal, giving the Buccaneers one more chance to take the win.

Starting with only a minute left, Winston led the Bucs down to the Atlanta 21-yard line. Needing a touchdown with only seven seconds to spare, Winston took the ball and scrambled up the middle.

Before getting hit, Winston pitched the ball backward, hitting the ground and bouncing into Mike Evans‘ hands. Evans then threw it back to Desean Jackson, who was by the sideline with an open path to the end zone.

However, the ball hit the ground and skipped through Jackson’s hands, eventually rolling out of bounds.

With the crazy ending, the Falcons came out victorious over the Buccaneers 34-29.

The Buccaneers, now 2-3 on the season, will travel back to Tampa to host the Cleveland Browns next Sunday.

The Falcons, now with a 2-4 record, will play the 1-5 New York Giants at home for next week’s Monday Night Football matchup.