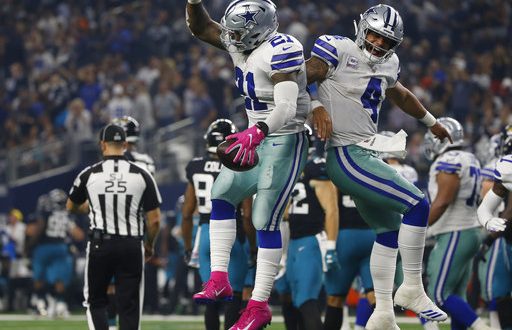 Dallas Cowboys running back Ezekiel Elliott (21) celebrates a touchdown with teammate Dak Prescott (4) in the second half of an NFL football game against the Jacksonville Jaguars in Arlington, Texas, Sunday, Oct. 14, 2018. (AP Photo/Ron Jenkins)

What a difference two weeks can make for the Jacksonville Jaguars. Before departing on a two-game road trip, the Jaguars were 3-1 and on top of the AFC South. Now, the Jaguars sit at 3-3 and in a three-way tie for first place in the division. This is all due to another road beatdown. The Jaguars got thoroughly embarrassed Sunday in Dallas, losing 40-7.

The Jaguars have been known throughout the league to have a dominating defense. Led by outspoken cornerback Jalen Ramsey, the defense shuts up opposing offenses. However, the Cowboys offense shut up the Jaguar defense by posting 40 points on them. This was even more shocking given the fact the Cowboys passing game has been subpar this season.

The Cowboys struck early and often, scoring on all four first-half drives. Dallas took its first drive and turned it into three points, thanks to a 50-yard field goal from kicker Brett Maher.

The next Cowboys drive saw quarterback Dak Prescott take it himself for a 17-yard touchdown run. This gave Dallas a 10-0 with 3:47 remaining in the first quarter.

Prescott would get his touchdown passes on the next two Cowboy possessions. Prescott found receiver Cole Beasley for the 17-yard touchdown reception, giving the Cowboys a commanding 17-0 early in the second quarter.

The second one came off a 16 play, 78-yard drive lasting over seven minutes. The drive was capped off by another touchdown grab for Cole Beasley, this time for 9 yards. This extended the Cowboys lead to 24-0 heading into the half.

Prescott finished the game with 183 yards passing, a career-high 82 rushing yards and three total touchdowns. His backfield mate, Zeke Elliott, finished the day with 106 yards and a touchdown.

The Jaguars defense allowed the Cowboys to rack up 378 yards of offense.

“Hard work is the only way to get out of this. There’s no other formula.” pic.twitter.com/cTdmAvSF82

The Jaguar offense couldn’t get into any sort of rhythm on Sunday. Three of Jacksonville’s four first-half possessions ended in three and outs. The one drive where Jacksonville had any momentum ended with a sack from Cowboys defensive tackle Malik Collins for a loss of eight yards.

In the second half, the offense didn’t get much better. The Jags got their only touchdown of the game thanks to a 34-yard touchdown pass from quarterback Blake Bortles to wide out Dede Westbrook. This put the Jags down 24-7. However, the wheels fell off after the only score. A Cowboys field goal made it 30 -7. Then, on the ensuing Jaguars possession, Bortles deep bomb to the left side was intercepted by Cowboys safety Jeff Heath. On the very next offensive play for Jacksonville on the next drive, wide receiver Keenan Cole fumbled the ball and was recovered by the Cowboys. This led to an Elliott 15 yard touchdown run to extend the lead to 37-7.

Bortles struggles continued. He finished the game with just 149 yards passing with one touchdown and one interception.

After the game, Jaguars head coach Doug Marrone took the blame for the loss and the team needs to get back to work.

The Jaguars return home next week for the big game in the divisional standings. They host the Houston Texans, who also sit at 3-3, on Sunday. The Cowboys also have an important divisional game next week when they travel to the nation’s capital to face the Washington Redskins on Sunday.