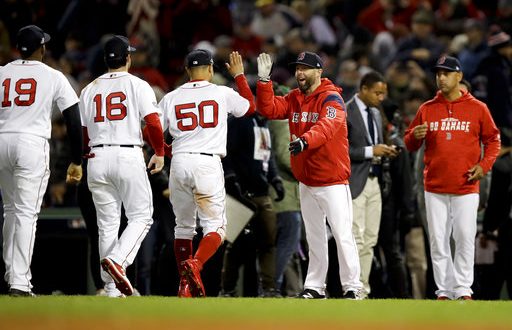 Members of the Boston Red Sox celebrate after their 7-5 win against the Houston Astros in Game 2 of a baseball American League Championship Series on Sunday, Oct. 14, 2018, in Boston. (AP Photo/Charles Krupa)

Red Sox Even Series 1-1 With Astros in ALCS

The Boston Red Sox utilized their home field advantage to even the American League Championship Series with the Houston Astros on Sunday night. The Sox bounced back from a Saturday night loss to beat the Astros 7-5 in Game 2.

Boston was on the board early with an RBI single from Andrew Benintendi in the bottom of the first. Following Benintendi’s lead, Rafael Devers smacked a single to left, which brought Benintendi home. A productive inning for the Sox and they were up 2-0 after the first.

Marwin González homered to left, bringing Yuli Gurriel home. Now, it was 4-2, the Astros were in the lead, and the Sox needed to get to work. And they did.

In the bottom of the third, Jackie Bradley Jr. came in clutch by delivering a go-ahead, three-run double to deep left with two outs, which brought home Xander Bogaerts, Steve Pearce, and Devers. Now, they were up 5-4 and were able to maintain the lead for the remainder of the game.

Neither team scored again until the bottom of the seventh when Betts scored on a passed ball by Maldonado, which gave the Sox a two-run lead. Bottom of the eighth, Boston did it again and took a three-run lead with Betts’ RBI double.

Top of the ninth, the Astros scored on Jose Altuve’s single, but that wasn’t enough. Final score at the Green Monster was 7-5, Boston.

On the mound for Boston was former Ray David Price. Price went 4.2 innings and gave up four runs on five hits, walked four and struck out four. For the Astros, they had righty Gerrit Cole on the mound. Cole went six innings, gave up five runs on six hits, while walking two and striking out five.

Both teams worked several relievers, but in the end, Matt Barnes earned the W for Boston, with Cole taking the L.

After the game, Sox skipper Alex Cora commented on his team’s bullpen and their outstanding efforts in Game 2.

Let’s go back to the bottom of the third when JBJ lit up the Green Monster with his power and energy. Bases loaded, two outs, and boom! A triple off the left-field wall that ignited the stadium.

And it’s not only the Red Sox and their fans who notice how much this veteran means to this team. After the game, Houston’s manager AJ Hinch talked about how, “he ignited them from the very beginning of the game.”

“The energy in this place when he comes up to bat is really electrifying.”

What’s Next in the ALCS?

With the championship series being best-of-seven, this matchup will head to Houston for Games 3, 4, and 5.

Game 3 is set for tomorrow night with the first pitch at 5:09 p.m. The Astros will have lefty Dallas Keuchel on the mound with another former Ray, Nathan Eovaldi, starting for the Sox.