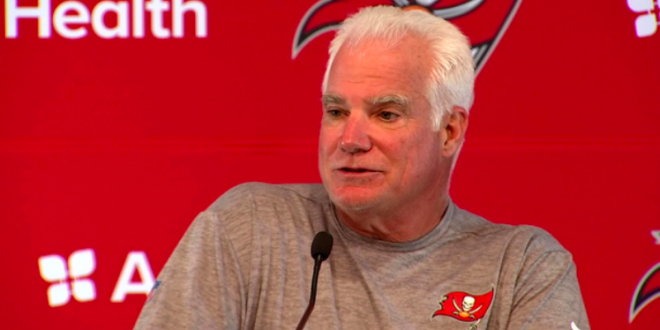 The Tampa Bay Buccaneers season kicked off with two really huge wins. The Bucs beat the Saints 48-40 in Week 1. Then in Week 2, they edged one out 27-21 over the defending Super Bowl Champions in the Philadelphia Eagles. However, since their early success, they have crumbled and suffered three straight losses.

Woes of the Bucs

For the most part, Tampa Bay is closely winning or unfortunately, closely losing their games this season. They have only been blown out this season by the Chicago Bears in a 48-10 loss. Every other Bucs game this season has been decided by less than ten points.

On Sunday, the Bucs traveled to Atlanta to face the Falcons and had hopes of turning their season around. As the game kicked off the Bucs were trailing nearly the entire time and just couldn’t fend off the Falcons. In a game where Bucs quarterback Jameis Winston was 30-41 with 4 touchdowns and 395 yards, the Bucs lost 34-29.

Just one day after the loss to the Falcons, the Bucs decided to part ways with their defensive coordinator, Mike Smith. The Bucs have allowed 30 points or more in four of their five games this season. Their defense is dead last in the NFL, surrendering 34.6 points per game, and 439.8 yards per game, which is second worst in the league.

Today, the Tampa Bay Buccaneers fired their defensive coordinator Mike Smith. Since 2016, when Smith joined the Bucs, they have allowed 20 400-yard games, most in the NFL. pic.twitter.com/nnjfciqgte

A few weeks ago Bucs Head Coach Dirk Koetter said to the media, “If I fire Mike Smith, then what?” Well, it is now, “now what.”

Koetter said that he has the utmost respect for Smith as a man and football coach and that any issues the team has had are no one person’s fault.

“These decisions are always difficult, but our top priority here is to ensure that we do everything possible to help this team succeed,” Koetter said. “I didn’t ever see this day coming but it’s here. So we have to make decisions that give us the best chance for our football team moving forward. That’s all you can do.”

As the Buccaneers say goodbye to Mike Smith, they welcome a friendly face in Bucs linebackers coach Mark Duffner. Duffner will continue to coach linebackers in addition to also becoming defensive coordinator.

Buccaneer linebacker Lavonte David said that fans can expect to see a lot of energy and excitement from Duffner because that is exactly what the linebackers get from him.

Buccaneers fans are hoping to see more fun football in their future. Hopefully with more fun also comes more wins as the Bucs try and salvage this season and forget about their woes in recent weeks.