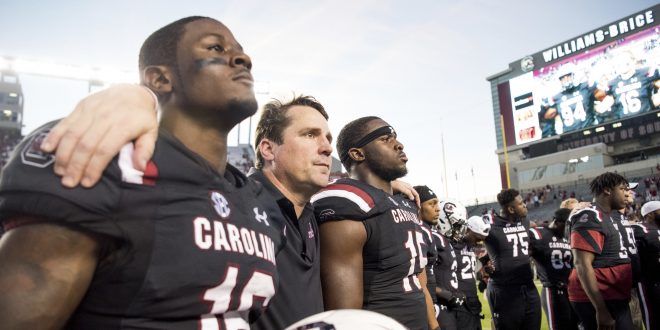 South Carolina At the Break

The Gamecocks head into their bye week looking to rest up and find some consistency.

South Carolina sits at 3-3 on the season and 2-3 in the SEC. That is good enough for fourth in the SEC East. But, they have yet to win back-to-back games this season.

Gamecocks head coach Will Muschamp said on Wednesday’s SEC teleconference his players were off until a light workout session on Tuesday following their loss to Texas A&M.

Muschamp on managing the open week:

Muschamp said the week off won’t change how the team recruits. He said the entire staff, including him, spent Monday on the trail and the same will take place Thursday and Friday.

“We practice in the morning so that helps us on a Thursday afternoon to be able to catch some practices and a couple games Thursday night,” he said. “That helps us to have an evaluation day.”

South Carolina has 18 hard commits for their 2019 class according to 247Sports. It is led by South Carolina native, and No. 1 defensive end in the country, Zacch Pickens.

They have a number of targets who call the Palmetto State home with six of them already committing to Muschamp’s team.

Working Out the Kinks

Muschamp said the Gamecocks are working on specific aspects of their game during their two practices this week.

He said Wednesday morning’s practice was a physical one that focused on first-and-10 situations, working in the red zone and improving special teams.

South Carolina has scored on 18 of its 22 red zone attempts with 12 being touchdowns. On defense, Muschamp’s squad has allowed scores on 22 of 28 attempts and 13 are touchdowns.

Meanwhile, Thursday’s practice will feature a concentration on third downs and one-minute drills.

The Gamecocks rank 10th in the conference in third-down conversions on offense (39.7 percent). They only allow 25 percent on defense.

Muschamp said none of the freshmen who haven’t seen playing time this season have earned any to this point.

“The guys that have played are still the ones who are going to be playing,” he said.

Muschamp on some of his freshmen:

He also elaborated on the status of quarterback Jake Bentley. He said Bentley has been receiving treatment on his grade 1 MCL sprain.

Muschamp added he left Saturday’s game against the Aggies sore more than anything.

South Carolina will keep resting as they will have Friday and Saturday off before getting back to work on Sunday before heading into the game week against Tennessee.