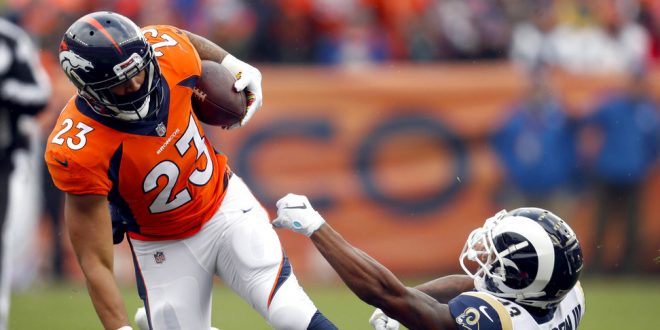 Typically in the NFL, the prime-time matchups pit two good teams against each other with high stakes on the line. It’s a similar situation for Broncos vs. Cardinals, except the teams aren’t very good. The Broncos are 2-4 and the Cardinals are 1-5. The two teams don’t have great records, but this game does have high stakes in a sense. The loser of this game spirals further into a hole, whereas the winner has a chance to rebound off the win.

The Broncos started the season 2-0, but have since lost 4 straight. It isn’t simply just a case of starting hot and fading, but it is a tale of two teams. Those two teams are: Home and Away. While almost every team plays better at home, the Broncos have taken that to an extreme. Both of the Broncos’ wins came at Mile High Stadium, and they’ve also played the 5-1 Kansas City Chiefs and 6-0 Los Angeles Rams very close at home. On the road, it’s a whole different story. In their two road games, the Broncos have lost by an average of 15.5 points.

The Broncos defense still has playmakers up front, but it’s not quite the same. Von Miller is still sacking quarterbacks, and new first-round draft pick Bradley Chubb has played well on the line. Still, the defense as a unit gives up big plays and can’t seem to figure itself out away from the fans at Mile High Stadium. What’s promising: they are facing a still-developing offense and young quarterback.

On offense, the Broncos are led by NFL journeyman Case Keenum. Keenum has, in a way, stabilized the quarterback position for Denver, but it’s still not great. He can move the ball with his arm, but he has a propensity for turnovers. Just look at his stats: 7 touchdowns, 8 interceptions.

The biggest help for Keenum is that the Broncos can run the ball. They can really run the ball. With a pair of rookies in Royce Freeman and Phillip Lindsay, the Broncos have proved able to move the ball on the ground. That is a strength they can and will need to lean on.

The Arizona Cardinals are rebuilding. There’s no other way around it. They’ve got a new coach, a depleted roster, and are in one of the toughest divisions in the league. One bright spot: rookie quarterback Josh Rosen. The Cardinals officially made the move to him only a few weeks ago, but he’s played well. Unfortunately, there’s not much around him to work with.

The Cardinals offensive line is more like a sieve than a line. It’s a major weakness for the offense and something they are constantly trying to work around. The running back position is in good hands with versatile David Johnson. The trick will be to make sure he stays healthy. The receiving corps and tight end group has playmakers in the likes of Larry Fitzgerald, Christian Kirk, and Ricky Seals-Jones. Rosen and the offense are still developing, but it has yet to translate to meaningful production.

Josh Rosen to Christian Kirk for a 75-yard touchdown!pic.twitter.com/K6YkiJ32Od

Defensively, the Cardinals are hard to pin down. They have talent, specifically in pass-rusher Chandler Jones and cornerback Patrick Peterson. They also have one of the better yards per play allowed numbers in the NFL at 5.4.  Despite this, they have struggled to consistently generate stops. That coupled with an inconsistent offense has made for a tough season.

The two biggest factors in the Thursday night game: can the Broncos play well on the road and can the Cardinals protect Josh Rosen?

The Broncos have yet to have a good road showing, but that could change this week. Playing in Glendale, they won’t have to worry about weather and they can line up and go play. In particular, the defense will need to step up without the backing of a home crowd. The Broncos should be able to tee off against the young quarterback, as well as score just enough points to win. For that to happen, the entire team needs to step up as they try and get back to .500.

For the Cardinals, it’s all about protecting the “Rosen One.” Rosen is a cerebral player, and if he is given time he will figure out how to carve up a Denver secondary that isn’t what it used to be. Against the pass-rushing duo of Von Miller and Bradley Chubb, that’s a difficult ask for his hobbled offensive line. The Cardinals may use extra tight end blocking or a barrage of quick passes to try and neutralize the threat. It all comes down to the offensive line though, and if they can play well, the Cardinals can win.

The Broncos play the Cardinals at 8:20 p.m. You can hear the game on ESPN 98.1 FM, 850 AM WRUF immediately after the Gators soccer game.

Next week, the Broncos travel to face the division rival Kansas City Chiefs on October 28 at 1:00 p.m. The Cardinals next host the San Francisco 49ers that same day at 4:25 p.m.