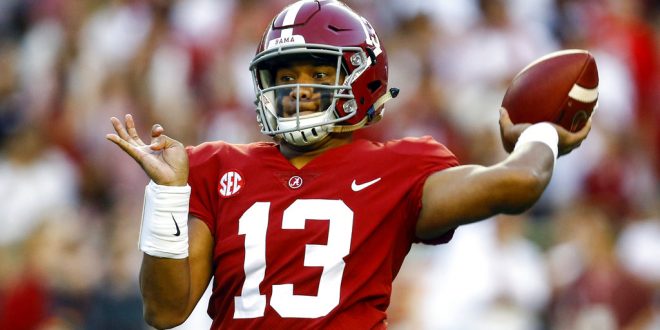 SEC Preview: Alabama Crimson Tide heads to Knoxville for a date with the Vols

It won’t be your typical southern family reunion in Knoxville, but it’ll be pretty darn close.

On Saturday, Jeremy Pruitt will lead his Tennessee Volunteers squad against the No.1 Alabama Crimson Tide. It’ll be the first time Nick Saban will face Pruitt, his former defensive coordinator (2016-17).

It won’t, however, be the first time Saban has gone against a former assistant. In his reign as head coach, the Alabama leader is undefeated in 13 games against his former assistants.

He’s looking to keep that going on the road against an interesting UT team that has bounced back from early season struggles.

After their loss at home against Florida in late September, the Volunteers looked lost. In the thick, bustling forest that is the landscape of college football, Tennessee couldn’t find their way out of the brush.

The next week, Pruitt and his UT squad continued to navigate through the SEC. However, the Volunteers ran into a second-ranked Georgia Bulldogs, getting trounced on the road heading into the bye week.

But something happened during Tennessee’s off-week. After taking some time off, the Volunteers hit the road and knocked the No. 21 Auburn Tigers in the mouth at Jordan-Hare Stadium.

This week, they’ll try to do the same against the undefeated Crimson Tide. Leading the way should be Jarrett Guarantano, the Volunteers quarterback since the start of the season.

Against the Auburn Tigers, Guarantano had his best game of the season. The redshirt sophomore completed over 65 percent of his passes, chucking the ball for 328 yards and two touchdowns.

In recognition of his performance, the SEC crowned Guarantano the offensive player of the week. It also earned recognition from Saban, as he praised Guarantano’s growth from the beginning of the season to now.

For Nick Saban, Saturday’s contest should be nothing but another contest. On Wednesday during the SEC teleconference, Saban talked about the fact of playing against another former assistant. When asked if there is any advantage, Saban slightly shrugged it off and said its the same deal with the opponent.

But he shouldn’t have to worry about any advantage if Alabama heads into the game with all hands on deck. After reports that starting quarterback Tua Tagovailoa re-aggravated a knee injury against the Missouri Tigers, the star QB turned a full practice on Tuesday and set any rumors to rest.

The Heisman hopeful should be good to go for Saturday’s game as he prepares to face Tennessee for the first time in his career as a starter. His stat line is clear of any blemishes to this point in the season. Tagovailoa has yet to throw a ball to the other team and has connected with his receivers for 21 touchdowns, leading the SEC.

His 1,760 yards is also good enough for third in the Southeastern Conference, trailing only Jordan Ta’amu (Ole Miss) and Kellen Bond (Texas A&M).

Bottom line: If Alabama continues to do their thing, there should be no issues for the No.1 team in the nation against the 3-3 Volunteers.