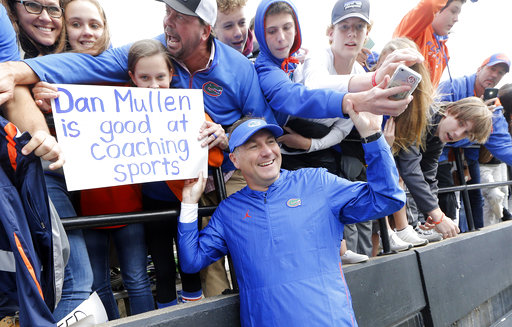 The ninth-ranked Florida Gators (6-1) and the seventh-ranked Georgia Bulldogs (6-1) are meeting in the middle at TIAA Bank Field in Jacksonville this Saturday. It’s the Gators’ highest ranking in the Associated Press Top 25 Poll since Nov. 15, 2015. This game has an enormous effect on the SEC Eastern Divisional race, as both teams sit at the top tied 4-1 in the SEC East.

Saturday marks the 96th meeting between the two programs, which Georgia leads 50-43-2. However, the Gators are 21-7 since 1990.  It will also be the sixth time that both Florida and Georgia are ranked in the top-10 when they meet each other. The Gators are 3-2 in those matchups, and they won the last three in a row.

Both teams are coming off of bye weeks, allowing double the preparation time for this Florida-Georgia match-up. Florida quarterback Feleipe Franks said the team can’t afford to have bad practices.

“You come to Florida to play in big games like this,” Franks said.

Even though Saturday will be Dan Mullen’s first head coach appearance in Jacksonville, he still knows what the atmosphere of the big game consists of.

For the first time, SEC Nation and College GameDay will broadcast from the same regular-season game.

The Gators have won five consecutive games under Mullen. Mullen said the Gators do better in the state of Florida. Despite Georgia’s 16-36 fall to LSU,  Mullen said Georgia is a very balanced team.

The Gators will hit practice Monday. Franks said the Gators need to “come out today and be prepared to practice with a fast tempo” after the bye week.

“Rivalry games you love winning because it’s bragging rights for the next year,” Mullen said.

Kate Venezio is a fourth-year telecommunication-news student at the University of Florida. Kate does it all: Behind the camera she captures emotional moments as a photographer for the University of Florida Athletic Association. She's comfortable being in front of the camera, too. Kate interviews players, coaches, fans and family members for pre- and post-game coverage as a beat reporter for ESPN Gainesville/WRUF-FM. In addition, Kate produces the sports segment for the weekly WUFT News program. There, she's responsible for writing the script in its entirety to include production commands. The presentation includes video highlights and interviews taped and edited, and Kate then live anchors the final package on a daily deadline. In addition, she writes stories for wruf.com where she informs sports fans of local, state, and national trending topics. Kate also utilizes social media as a tool to help get the stories in front of viewers.
@@kate_venezio
Previous Defending Champs Face Early Season Struggles
Next Falcons Take Down the Giants 23-20