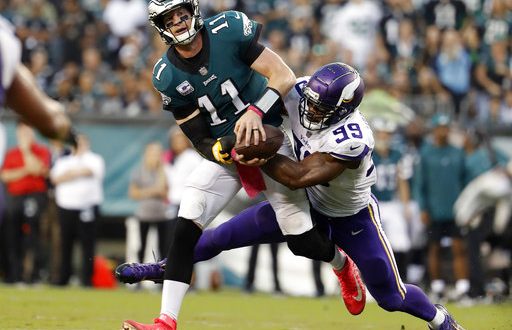 The defending Super Bowl champions, the Philadelphia Eagles, are looking to bounce back from a slow start to their season.

After blowing a 17 point lead to the Carolina Panthers this past Sunday, the  Eagles find themselves sitting on a 3-4 record. The defending Super Bowl Champions have had a season plagued with injuries and a struggling secondary.

The Eagles’ loss to the Panthers showcased the weaknesses of Philadelphia’s secondary. Panthers quarterback Cam Newton led his team to a comeback victory, scoring 21 unanswered points in the fourth quarter.

Panther’s head coach Ron Rivera noted how special it was for his team to defeat the defending champions, 21-17.

The Eagles struggled most notably against the Vikings, where the secondary allowed receivers Adam Thielen and Stefon Diggs to record a combined 207 yards. The secondary also struggled in their losses to the Buccaneers and the Titans.

Where the Eagles secondary has failed to stop the pass, the defensive line has stepped up to stop the run. Philadelphia’s rush defense is ranked second in the league and averages 85.7 rush yards a game.

The biggest obstacle facing the Eagles is the constant presence of injuries.

Philadelphia lost a huge threat to their passing game when wide receiver Mike Wallace was placed on injured reserve on Oct. 15. The Eagles offense also faced a setback early in the season when running back Darren Sproles suffered a hamstring injury during Week 1.

Defensive tackle Destiny Vaeao was also placed on injury reserve, leaving a strain on the defensive line. Defensive tackle Fletcher Cox and defensive end Michael Bennett have had to take more snaps due to Vaeao’s injury.

Despite injuries, Eagle’s head coach Doug Pederson remains confident in his team and discussed how he feels that no one has given his team much credit.

The playoffs aren’t out of the picture for the Eagles though. Despite their losing record, the Eagles are just one win behind the NFC East Division leader, the Washington Redskins.