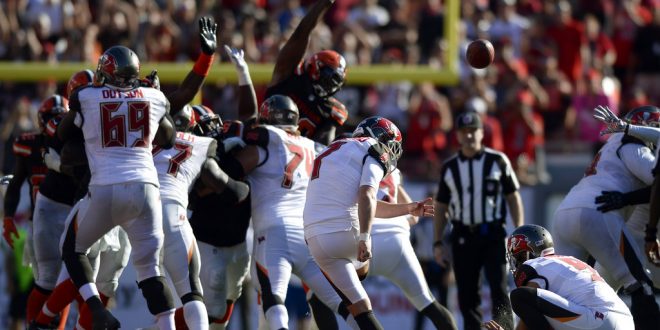 Tampa Bay Buccaneers’ kicker Chandler Catanzaro came onto the field looking for redemption. With just over a minute left in overtime, Catanzaro set up for a 59-yard field goal against the Cleveland Browns.

He had already missed a game-winning field goal that day, as well as an extra point.

However, this did not rattle him.

Catanzaro hooked the ball through the uprights, giving the Bucs the 26-23 win.

With the win, the Buccaneers ended their three-game skid to get them back on track.

The two teams came out sloppy to start the game.

After a Cleveland punt that pinned the Buccaneers on their own one-yard line, defensive tackle Trevon Coley stuffed Peyton Barber in the end zone for a safety.

However, Catanzaro drilled a 38-yard field goal on Tampa’s next drive, then Desean Jackson took the ball on a handoff and ran 14-yards for a Tampa touchdown.

Catanzaro would miss the extra point, but the Buccaneers put together another touchdown drive on their next possession. This time, quarterback Jameis Winston took it in himself with another 14-yard touchdown run.

Jameis Winston runs it in himself! Bucs now up 16-2.#GoBucs | #CLEvsTB pic.twitter.com/lm6UJTRKz4

Tampa’s offense lost it’s groove after the touchdown, turning the ball over on their next two drives. Winston threw an interception to Christian Kirksey on a pass up the middle, then Cameron Brate fumbled the ball in Tampa territory.

However, the defense held strong throughout the whole first half. They held the Browns to four three-and-out drives and no offensive scores, keeping the score 16-2 after the first half.

The second half started out rough for Tampa, with Winston fumbling the ball in Tampa territory. The Browns recovered it and scored on a touchdown pass from Baker Mayfield to David Njoku.

The Buccaneers scored a few drives later on a Ronald Jones two-yard run, but the Browns responded again with a touchdown of their own.

After another Tampa punt, the Browns drove the ball 79-yards to the Tampa one-yard line.

However, the Buccaneers defense held strong, stuffing Baker Mayfield on fourth and goal to prevent the touchdown. The Browns would score on their next possession, though, to tie the game at 23-23.

Winston drove the offense 53-yards to set a 40-yard field goal for Catanzaro, but he missed wide right as time expired to send the game to overtime.

Both defenses proved stout during the overtime period. The Browns offense could not move the ball against the Bucs defense, and a Winston interception did not cost Tampa the game.

With a minute left and both offenses stalling, Tampa coach Dirk Koetter sent out Catanzaro for the 59-yard field goal.

Catanzaro drilled it, marking the longest field goal in overtime in NFL history.

With the historic kick, the Buccaneers won 26-23.

With the win, the Buccaneers moved to 3-3 on the season. The victory kept them in contention in the NFC South. Though they are still two games back of the 5-1 New Orleans Saints, their .500 record keeps them in the playoff mix.

The Browns, on the other hand, fell to 2-4-1 on the season and again are at the bottom of the AFC North.

The Buccaneers will travel to Cincinnati to take on the Bengals next weekend at 1 p.m.

The Browns will play the Steelers in Pittsburg on Sunday at 1 p.m.

Jonathan is a sports journalism student at the University of Florida. He enjoys videography, editing, photography, and writing.
Previous Gator Soccer Falls to Missouri 2-0 as SEC Tournament Draws Near
Next Dolphins Trounced by Lions

New Orleans Saints head coach, Sean Payton has announced that he will be not be …