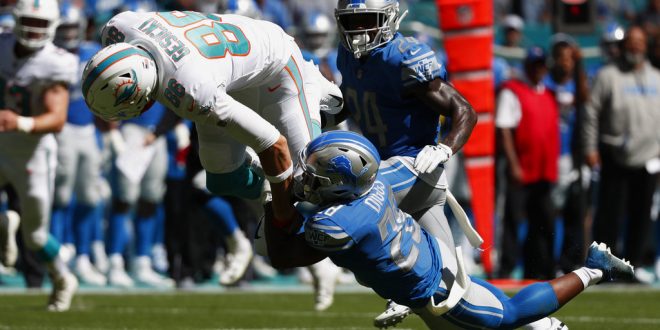 It has been four years since the Lions and Dolphins last faced each other. Four years ago, Matthew Stafford had Calvin Johnson catching passes left and right and Ryan Tannehill was trying to establish himself as a legitimate NFL quarterback. On Sunday, it was Stafford again who terrorized the Dolphins defense and led the Lions to a victory.

With Tannehill still injured, it was Brock Osweiler who got the starting nod. There’s only so much that can be expected when the backup quarterback is starting, but Osweiler does have starting experience. He did as well as head coach Adam Gase and the Dolphins could’ve expected, especially with the injuries flooding the roster. Another dynamic playmaker, wide receiver Albert Wilson, sustained a hip injury in the game and the team is not sure how long that will keep him out. As the injuries continue to mount for Miami, the team still has a 4-3 record and is in second place in the AFC East.

With Osweiler under center, there is only so much that the Dolphins can get accomplished. The failed starting quarterback had his chance in Denver and Houston but was unable to maintain his starting role. The Dolphins have leaned on the running game during Tannehill’s absence. The emergence on Kenyan Drake from last season has provided a steady stronghold in the running game this season. Drake rushed for 72 yards and a touchdown on six carries and also caught four passes from Osweiler. Another playmaker who hopes to avoid injury is wide receiver Danny Amendola. He had the best game since joining the Dolphins as he was targeted six times for 84 yards and a touchdown.

The Dolphins have a short week as they head to Houston to face the Texans on Thursday night. The quick turn around could not have come at a worse time for the Dolphins, as they are trying to get healthy. However, the Texans lack of explosiveness on offense could make for a competitive game against Miami, as they may be able to come out on top if they can keep it close. A Thursday night win would be huge and a loss would send the Dolphins back to a 500 record.