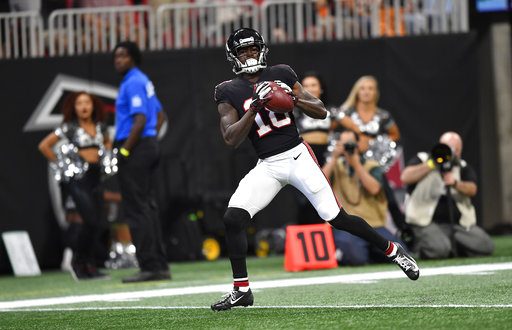 Atlanta Falcons wide receiver Calvin Ridley (18) makes a touchdown catch against the Cincinnati Bengals during the second half of an NFL football game, Sunday, Sept. 30, 2018, in Atlanta. (AP Photo/John Amis)

Coming into tonight’s game, the New York Giants have lost three straight, giving up over 30 points in all three. However, the Atlanta Falcons also have cause for concern.

In 2018, Eli Manning has been the worst QB when it comes to facing pressure.

Will we see the Eli that beat Brady twice in the super bowl, or will he continue to struggle and overthrow his receivers?

Passing from a clean pocket is one of the most stable stats for a QB and the Falcons are hoping that’s the case for Matt Ryan tonight and the rest of the season.

The Falcons are completing 23.1 percent of targets thrown 20+ years this season compared to 18.9 percent last season. With the added threat of the deep ball, the Falcons will look to add in some big throws against the Giant’s defensive backs.