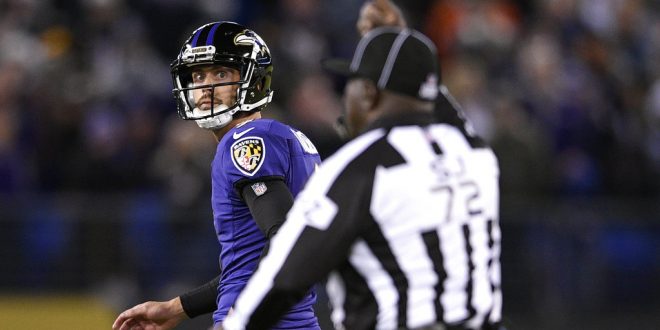 Baltimore Ravens kicker Justin Tucker, left, walks off the field after missing a point after attempt in the second half of an NFL football game against the New Orleans Saints, Sunday, Oct. 21, 2018, in Baltimore. (AP Photo/Nick Wass)

Those were three pretty sure things going into Sunday’s meeting between the Ravens and Saints. Tucker had made all 220 of his extra-point attempts in his career going into the Week 7 matchup in Baltimore.

So when Joe Flacco drove the Ravens down the field and connected with John Brown on a 14-yard touchdown to make it 24-23 with 24 seconds left, it seemed inevitable that the game would head to overtime after Justin Tucker’s PAT.

But, there’s a first time for everything.

Tucker’s kick looked good off the foot but then sliced wide right with the wind for his first miss in 223 career attempts. Tucker seemed as shocked as the fans undoubtedly were.

“Every kicker, every football player is going to come across a moment, a challenging moment,” Tucker said after the game. “You know, every kicker is going to, if you play long enough, you’re going to have a kick that you want back and tonight was that night for me. But like Joe (Flacco) said, the only thing we can do is just go to work and try to make, you know, the best out of a bad situation.”

The missed kick was the nail in the coffin for a Baltimore team that had to come back after blowing a 17-7 lead at the start of the fourth quarter.

A fourth-quarter touchdown run from Alvin Kamara and a touchdown reception from Michael Thomas helped the Saints storm back to take the lead 21-17 with under five minutes left.

Surprisingly enough, the 24-23 win is New Orleans’ quarterback Drew Brees’ first-ever win over the Ravens. Baltimore had been the only NFL team which Brees had not yet defeated. The Ravens posted a 4-0 record against him in his career dating back to his days in San Diego.

Brees made sure he didn’t drop to 0-5 though, posting an efficient 22-for-30, 212 yard and two-touchdown performance en route to the one-point win.