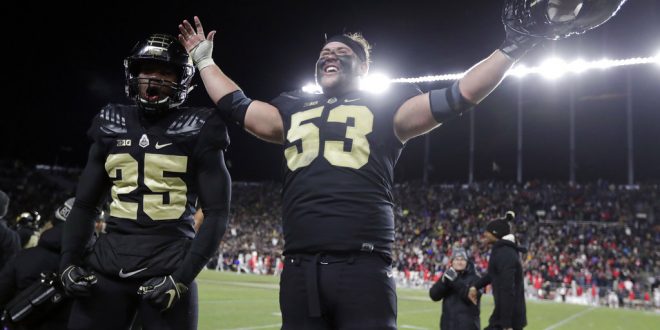 An upset in the top four caused a big shakeup in the rankings. Let’s look at some of the big stories after Week 8 of college football.

Before Ohio State’s game against the Purdue Boilermakers, it seemed to be a given that the Buckeyes were a shoe-in to make the College Football Playoffs.

Purdue’s 539 total yards exposed a weak OSU defense. Boilermakers’ quarterback David Blough completed 25 of his 43 passes for 378 yards and three touchdowns. The secondary for Ohio State could not stop the high-flying offense on Saturday. They also allowed 161 yards on the ground to make matters even worse and kept the Buckeyes’ offense off the field.

Vote for @david_blough10 as the Manning Award Star of the Week!

When it was on the field, that offense was no help. It got off to a slow start and was unable to score touchdowns when in it got into the redzone.

While Purdue executed in the first half, OSU stumbled, scoring only three points with a missed field goal and punting three times. Problems continued into the second half as the offense again was forced to kick another field goal in the redzone after a 10-play, 69-yard drive.

Ohio State’s running game struggled all day, totaling only 76 yards on 20 carries. Heisman hopeful Dwayne Haskins threw for an impressive 470 yards and two touchdowns but ended the game with a pick-six that iced the contest.

Even after the loss, Buckeyes’ coach Urban Meyer said he is remaining confident in the team to bounce back and finish the seasons strong.

The Buckeyes dropped nine spots to No. 11 in the recent AP poll and will need to rely on big losses ahead of them to get back into the playoffs.

Is Michigan for Real

The annual rivalry game between Michigan and Michigan State began with a scuffle between the two teams. It ended with a 14-point win for Michigan over its in-state rival.

Coach Jim Harbaugh did not mince words about the pregame fight, stating clearly that he felt Spartans’ coach Mark Dantonio instigated it.

It was unclear who won the skirmish, but there was no question who won the football game. The Wolverines, now 7-1 and No. 5 in the recent AP poll, appear to be a legitimate contender for the College Football Playoffs.

A big reason for the seven-game win streak is Michigan’s defense. The defense leads the nation in yards per game allowed (220) and is No. 11 in 3rd down conversion percentage allowed (.287) through eight games. The defense rarely bends and seemingly never breaks.

The run game has been a big reason for the Wolverines’ recent success on the offensive side of the ball. Senior running back Karan Higdon has led the way with 831 yards and six touchdowns. Higdon led the way against the Spartans on Saturday with 144 yards on 33 carries. It is expected for him to continue to be the workhorse in the backfield for the foreseeable future.

With all of the chaos at the top of the rankings, Appalachian State quietly entered the AP top 25 for the first time in school history since its transition to the FBS level five years ago.

The Mountaineers (5-1) have not lost since opening the season with an overtime defeat at Penn State. Their recent win over the Louisiana Ragin’ Cajuns capped off the five-game win streak.

Running back duo of Darrynton Evans and Jalin Moore have led the impressive ground game with a combined 825 yards and nine touchdowns.

The team will now face 6-1 Georgia Southern on Thursday for another conference match up.