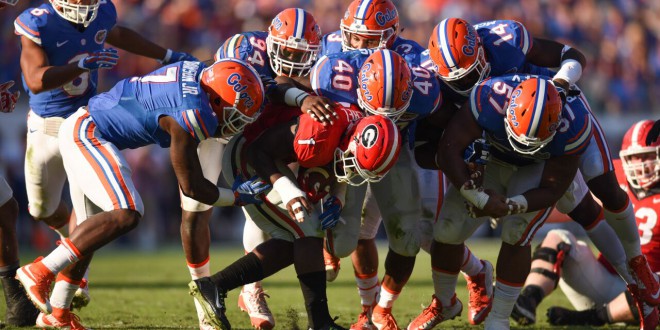 Grantham and Gators ready for a battle on Saturday

The Florida Gator football team will be in Jacksonville, Florida this weekend to take on the seventh-ranked Georgia Bulldogs. The top-10 match up will feature two 6-1 teams looking to keep their SEC East title hopes alive in what’s dubbed as “The World’s Largest Outdoor Cocktail Party”. To do that, Florida will need to rely on a run defense that only ranks 73rd in the country with UGA running backs Elijah Holyfield (488 yards, 4 TD’s) and D’Andre Swift (362 yards, 4 TD’s) waiting on the other side of the ball.

Grantham expects team to be ready for UGA’s offense

The Gators have won five in a row and in a lot of ways have the defense to credit for that streak. Defensive Coordinator Todd Grantham discusses whether he’s surprised with the team’s 6-1 record.

He was also asked what he’d credit to being the main reasons for his defense’s success since the Kentucky game.

Many are predicting the match up between the Gators and Bulldogs will come down to one possession. Grantham understands the importance of every play more than anybody, and he touched on that Monday.

Players ready for a dog fight on Saturday

The Florida-Georgia game is usually known for its physicality and according to some of the players this week, it’ll be more of the same in 2018. Linebackers David Reese and Rayshad Jackson expect a few punches to be thrown on Saturday, figuratively speaking of course. “It’ll be a fistfight the whole time,” Jackson said. “We’re all linebackers, we’re all capable of trucking [Georgia’s] running backs.” Reese shared the same thoughts when asked about Georgia’s rushing attack.

The Gators will need to be prepared to get physical against one of the better rushing attacks in the SEC. Stopping the run and forcing Georgia quarterback Jake Fromm into passing situations is a must if UF expects to win.