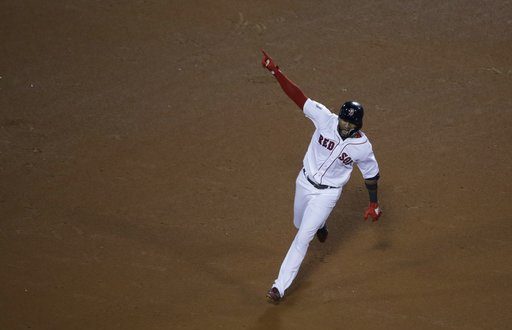 The Boston Red Sox defeated the Los Angeles Dodgers 8-4 to take a 1-0 lead in the World Series.

It would be hard to imagine a better pitching match-up than Chris Sale against Clayton Kershaw. It’s a battle of the aces, but it hardly seemed like it on Tuesday night. In the regular season, Sale finished his 27 starts with a 2.11 ERA. Kershaw had a 2.73 ERA in his 26 regular season starts.

In Game 1, both of these star pitchers struggled. Sale pitched just four innings, giving up three runs and five hits including a solo home run to Matt Kemp. Kershaw pitched four innings as well but gave up five runs in his time on the mound.

The Red Sox had no troubles with their offense in Game 1. Boston finished the game with 11 hits, eight runs and the team scored in four different innings. They were hot from the start. Mookie Betts got the team rolling with a lead-off single followed by a stolen base. Andrew Benintendi brought Betts home with his first hit of the night, and then two batters later a J.D. Martinez single gave the Sox a 2-0 lead. Benintendi was a huge part of Boston’s success, going 4-5 with one RBI and three runs scored. J.D. Martinez also had a good outing for the Red Sox, finishing with two RBIs and one run. Those two were instrumental in giving Boston a 5-3 lead over L.A. through five innings.

However, the biggest play in the game came from Eduardo Núñez. With the Red Sox up 5-4 in the 7th inning, Alex Cora decided to send Núñez to the plate to pinch-hit for Rafael Devers. Núñez came up huge, slamming a three-run shot over the Green Monster to put Boston up 8-4.

Alex Cora explained his decision t0 put in Núñez after the game:

Game 1 was the coldest temperature the Dodgers have played in this year. Unfortunately for them, Game 2 will likely be even colder with temperatures in Boston reaching the low 40s. With the weather coupled with a rowdy and energetic crowd at Fenway, the Red Sox have a definitive home-field advantage for Wednesday’s game.

David Price will start at pitcher for the Red Sox and Hyun-Jin Ryu will get the start for the Dodgers. Los Angeles will try to bounce back and tie the series at 1-1. Dodgers’ shortstop Manny Machado told the media a little bit about the team’s current mindset.

Previous Grantham and Gators ready for a battle on Saturday
Next Lamical Perine and Company, Key in Florida-Georgia Match-Up