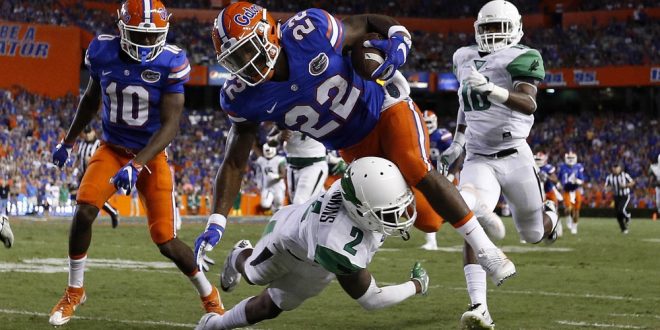 After not scoring a touchdown in the first five games of the season, Lamical Perine has found himself in the end zone three times in the last two match-ups.

The junior running back has been on a tear since the LSU game where he averaged five yards per carry and scored two touchdowns. Against Vanderbilt, Perine did damage through the running and passing game. The Mobile, Alabama native ran for 123 yards with a touchdown and made four catches for 93 yards.

Getting Ready For Jacksonville

Perine and the rest of the running backs corps are getting ready for what may be their biggest test of the season.

Florida will be looking to do what LSU did almost two weeks ago in Baton Rouge. The Tigers beat up the Bulldogs on the ground as they collected 275 yards and scored three touchdowns.

The team who wins in Jacksonville is usually the team that is the most effective in the run game. In 2017’s Georgia demolition of Florida, Sony Michel and Nick Chubb ran all over the Gators defense amassing 214 yards and scoring three touchdowns. The Bulldogs dynamic duo averaged over 11 yards per carry.

Last year, Perine was the only Gator who could say they had a solid game as he ran for 93 yards on 16 carries. Other than Perine, no one else had success carrying the football for Florida. Mark Thompson was 2nd in carries and only gained 38 yards.

Perine said that he expects a major change in how effective the run game will be against Georgia this Saturday saying that Dan Mullen is an ‘Offensive Guru’ and that the Bulldogs were calling out the plays last year.

Perine went more in-depth about how predictable the run game was last year in Jacksonville.

“We only had three or four run plays,” Perine said. “My grandma can call that out in her sleep.”

That will not be the case in the 2018 version of the Florida-Georgia rivalry as he says that even the players don’t know what is up Dan Mullen’s sleeve in terms of play calling.

Leave It to The Run Game

The Florida offense will go as far as the running game will take them.

The blueprint to upset the Bulldogs is there, let’s see if Dan Mullen and the run game can follow it.

The LSU Tigers will take advantage of this upcoming bye week.  The team will be …