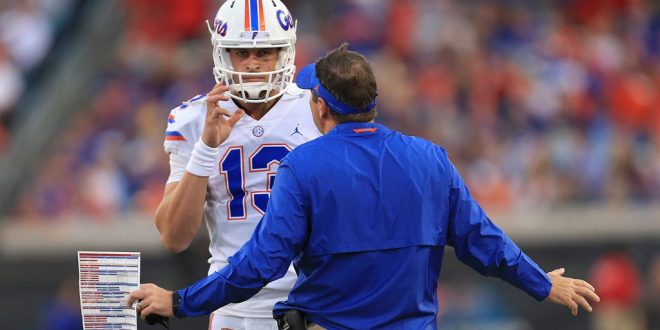 Florida Gator head football coach Dan Mullen was disappointed with the results of the Florida-Georgia game Saturday. In fact, Mullen said it might be the team’s worst execution performance this year. The Gators dropped to No. 13 in the Associated Press rankings after the Bulldogs snapped their five-game win streak.

The offense recorded a season-low 275 yards, two fumbles and UF quarterback Feleipe Franks completed 13 of 21 passes. Mullen said this game can be used as a teaching moment.

The Gator defense managed to stop the Bulldogs six times on the 1-yard line. Mullen said the team was looking good during some moments of the game.

Feleipe Franks threw for 105 yards, one interception and ran in a touchdown and freshman Emory Jones also had a chance to run a few packaged plays in the contest.

Jones ran the ball four times for 12 yards. Mullen said he was proud of Jones. “At times he did some good things,” Mullen said.

It was Jones’ second appearance of the season. Mullen said Jones will play in “at least two more games this year,” to allow the recruit to red shirt this season.

“He’s a competitive guy who likes to play and likes to win,” Mullen said. “I think he made some bad errors with the fumble, but he made some big plays too over the course of the game.”

Coach Mullen said defensive back CJ Henderson should be available to play this week after injuring his back early in the Georgia game.  Mullen said Henderson just has a bruise and has no structural damage; otherwise Mullen said the team is healthy going into the Missouri game.

Mullen said it’s all about getting better from week to week.

The Gators now prepare to host the Missouri Tigers in the Swamp for the Homecoming game. The team will play at home for the next three weeks taking on Mizzou, South Carolina, and Idaho.

Kate Venezio is a fourth-year telecommunication-news student at the University of Florida. Kate does it all: Behind the camera she captures emotional moments as a photographer for the University of Florida Athletic Association. She's comfortable being in front of the camera, too. Kate interviews players, coaches, fans and family members for pre- and post-game coverage as a beat reporter for ESPN Gainesville/WRUF-FM. In addition, Kate produces the sports segment for the weekly WUFT News program. There, she's responsible for writing the script in its entirety to include production commands. The presentation includes video highlights and interviews taped and edited, and Kate then live anchors the final package on a daily deadline. In addition, she writes stories for wruf.com where she informs sports fans of local, state, and national trending topics. Kate also utilizes social media as a tool to help get the stories in front of viewers.
@@kate_venezio
Previous Cleveland Cleans House
Next Klay Thompson Sets NBA Record with 14 Three-Pointers Against The Bulls