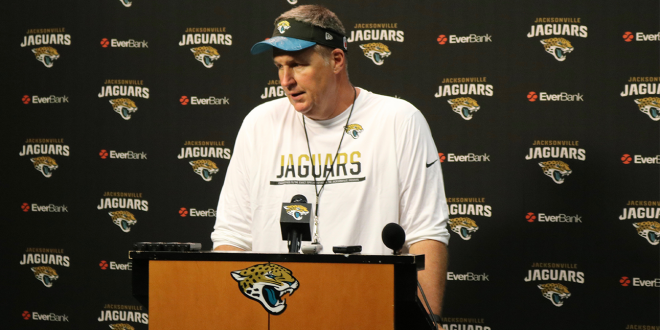 Where do the Jaguars go from here?

In the wake of Dante Fowler’s trade to Los Angeles at the trade deadline and the team currently in a slump, where does Jacksonville go from here?

After winning their first two games of the season, the Jacksonville Jaguars have now lost four straight games by a margin of 17 points. They now have a record of 3-5. The season is not turning out to be the season the team and fans expected after making it to the AFC championship last season.

The team looks to regroup and get their mojo back during the bye week.

No one expected to go into the bye with a 3-5 record.

Now we must use the bye week to fix it.

Doug Marrone puts blame on himself

Jaguars head coach Doug Marrone says the team has a lot to work on in many different areas, and it starts with him. Marrone said he has to do a better job as his message is not getting across to the team. He takes full responsibility for the way the Jaguars have been playing on the field and incidents that have happened off of the field.

When asked about the London incident, he said they are working on it, and he wasn’t going to go into specific details about it. They are still gathering information.

Marrone said,  “Before we start going on the field and performing better, we have to take a good look at what happening off the field.”

Bortles said its frustrating to go through a week of preparation of good practices and not being able to execute those things in the game. He expressed how he is not mad at anyone or himself. He said he gets frustrated with everybody, himself included, when they don’t do the things he knows the team can do.

Bortles said the Jaguars need to continue to find a way to be themselves.

“I don’t think anyone needs to be superman or anything special. We just have to do what we are all capable of,” Bortles said.

The Jags now are using this bye week to recuperate.

The Jags next game is against the Indianapolis Colts on November 11.

Kevin Smalls is a fourth year journalism student on the sports and media track from Jacksonville, Florida. He aspires to be a sports writer on the high school and collegiate level. He is currently taking courses at the University of Florida in the sports writing field to learn what it takes to be a sports writer. He writes web stories for ESPN Gainesville. He also informs the public of local, state, and national on sports trending for ESPN Gainesville.
Previous Santa Fe College Saints Volleyball Prepares For Postseason
Next First College Football Playoff Poll Of The Season Released 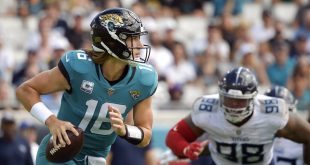