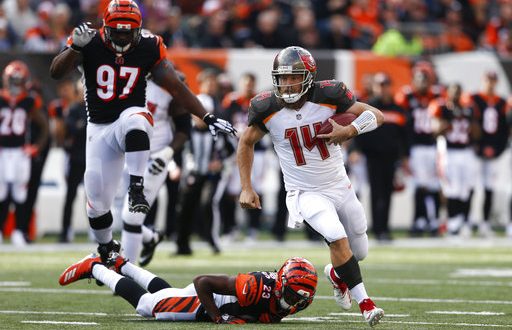 FILE - In this Oct. 28, 2018, file photo, Tampa Bay Buccaneers quarterback Ryan Fitzpatrick (14) runs against the Cincinnati Bengals during the second half of an NFL football game in Cincinnati. Fitzpatrick will start for the Buccaneers on Sunday against the Carolina Panthers after Jameis Winston was benched. (AP Photo/Gary Landers, File)

The Tampa Bay Buccaneers look to grab a win this weekend in an NFC South showdown against the Carolina Panthers.  The Bucs are on a one-game losing streak with an overall record of 3-4. Meanwhile, the Panthers are coming into the Sunday’s matchup on a two-game winning streak with a 5-2 overall record.

Coach Dirk Koetter announced earlier this week quarterback Ryan Fitzpatrick would start on Sunday against the Panthers. Koetter benched QB Jameis Winston during Sunday’s game against the Cincinnati Bengals after Winston threw his fourth interception of the game. During Sunday’s competition, Fitzpatrick rallied the team from a fourth-quarter 18-point deficit to tie the score. However, the Bengals secured a win by a field goal in the final seconds of the game. Despite the loss, Fitzpatrick went 11-15 for 194 yards and two touchdowns. Teammates and Koetter praise the quarterback for his leadership skills on and off the field, especially during Sunday’s game.

Fitzpatrick was the starting QB for the Bucs during Winston’s three-game suspension. This season, Fitzpatrick has thrown for 1,550 yards with 13 touchdowns and five interceptions.

While Tampa Bay has Fitzmagic behind center, Carolina has their own QB who has been magical for the team. QB Cam Newton has been a powerhouse for the Panthers this season, particularly in the running game. Newton has shown success running in the red zone and in the open field, proving he is a major component in the running offense. During last week’s 36-21 win against the Baltimore Ravens, Newton had 10 carries. The Ravens, who have arguably the best defense in the league, were unable to stop Newton and the Panthers offense. With Carolina’s track record, Tampa Bays defense will have to be ready to stop Newton and the rest of the Panthers’ offense on Sunday.

The key factor for Bucs success

In order for Tampa Bay to successfully grab a win this weekend, they need to secure the ball. The Buccs have struggled this season maintaining possession of the ball. With Winston on the bench, it is vital for Fitzpatrick to protect the ball, especially with a team as versatile as the Panthers. Carolina Safety Eric Ried has been a leading force for Carolina’s defense, not only in coverages but also blitzes. In last week’s game against the Ravens, Ried totaled seven combined tackles, three assisted tackles and one sack.

As of October 31, there are a few additions in the Bucs injury report. Wide receiver Mike Evans (knee injury) and cornerback M.J. Stewart (injured foot) are both completely out of practice. However, Vinny Curry (ankle) and Gerald McCoy (calf) are back, practicing on a limited basis.

The Panthers will host the Bucs at Bank of America Stadium on Sunday, Nov. 4. Kick off is at 1 p.m. on FOX.

New Orleans Saints head coach, Sean Payton has announced that he will be not be …