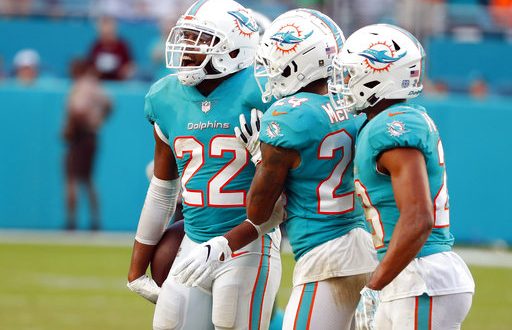 The field at Hard Rock Stadium wasn’t the only thing that was poor in Miami Gardens on Sunday. The play of both offenses was even worse. In a game that seemed like whoever scored the first touchdown of the game will win turned out that way. Dolphins linebacker Jerome Baker intercepted Sam Darnold with 11 minutes left in the game and took it 25-yards to the house. This gave the Dolphins the lead for good. However, the Jets did have a chance at the end, but Darnold would throw his fourth interception of the day. Dolphins snapped a two-game losing skid by beating the Jets 13-6.

To say the Dolphin defense has struggled the last three weeks would be an understatement. In the last three games, Miami has allowed over 30 points. Changes to the starting lineup were discussed and made. The message this week for the defense was going back to the fundamentals. Practice leading up to Sunday felt like training camp.

This back to the basics mentality worked for the Dolphins in a major way on Sunday. The defense frustrated the rookie Jets quarterback Sam Darnold early and often. The Dolphins brought the heat on the rookie and forced him to bad decisions. Miami sacked Darnold four times and intercepted him four times as well.

As the Jets crossed into Miami territory for the first time, linebacker Kiko Alonso intercepted Darnold’s pass. The Dolphins defense held the Jets to only 3 points in the first half with all the other drives ending in punts or interceptions.

Jets kicker Jason Myers missed a 50-yard field goal to tie the game in the third quarter. On the next Jets possession, Dolphins linebacker Jerome Baker scored the only touchdown of the game when he intercepted Darnold’s pass and ran it back for the touchdown. This gave Miami the 13-3 lead.

The Jets wouldn’t go quietly though as Myers nailed a 56-yard field goal to make it a one score game.

The Dolphins closed the game out with two interceptions on the final two New York drives. The first courtesy of safety TJ McDonald at the Miami 40-yard line. On the final drive of the game, the Jets were driving hoping to tie the game. Then, cornerback Walt Aikens closed the door with the team’s fourth interception of the day to seal the win for the Dolphins.

In a low scoring game like the one on Sunday, its key for the offense to limit mistakes as every drive is critical. It was mission accomplished for the Dolphins in that regard. The Dolphin offense was able to play mistake-free football, something the Jets couldn’t say.

Quarterback Brock Osweiler threw for 139 yards on the afternoon. Running back Frank Gore led the team in rushing with 53 yards on 20 carries. Gore passed Barry Sanders for sixth in all-time scrimmage yards. He finished the game with 18,196 all-purpose yards for his career.

The Dolphins had their fair share of injuries on the offensive line. Both tackles Juwan James and Laremy Tunsil left the game with injuries.

What’s a Dolphins game without some off-the-field drama? Safety Reshad Jones pulled himself from Sunday’s game in the third quarter. The crazy thing about this situation is that Jones wasn’t injured. Jones didn’t speak after the game to explain why he was out.

“It sounds like he pulled himself out,” head coach Adam Gase said after the game. “So I’ve just got to find out kind of what happened there.”

The Dolphin offense needs to pick up the tempo for next week’s trip to Lambeau Field to take on the Green Bay Packers. The Jets try to get back on track when they host the Buffalo Bills.