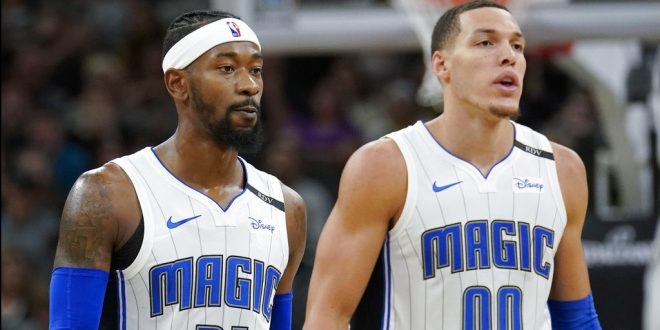 Orlando Magic's Terrence Ross (31) and Aaron Gordon walk off court during a timeout in the second half of an NBA basketball game against the San Antonio Spurs, Sunday, Nov. 4, 2018, in San Antonio. Orlando won 117-110. (AP Photo/Darren Abate)

The Orlando Magic have seen their struggles throughout the season. However, yesterday’s 117-110 victory over the San Antonio Spurs marked an end to their four-game losing streak.

This win was the first time in three games that the Magic scored over 100 points, and their hot shooting led to a season-high 12 three-pointers.

The Magic got off to a hot start, while the Spurs struggled to stop them in the first quarter. Orlando outscored San Antonio 36-26 after the first quarter, with Orlando’s offense clicking early. They shot 70 percent from the field in the quarter, a mark completely different from their season field goal percentage of 41.4 percent.

Aaron Gordon was a sparkplug for the Magic, as the high-flying young star energized the team throughout the game.

The second quarter saw a more even matchup between the two teams, but the Spurs were not able to make up much ground.

Evan Fournier shot the ball well in the first half, hitting 6 0f 7 shots, including two three-pointers. At the half, Fournier had 14 points, helping Orlando stay ahead.

The Spurs were able to keep the game close mainly by the play of Demar DeRozan, who would finish the game with 25 points and 7 rebounds.

The Magic led 64-53 at the half, but third quarter again saw offensive dominance again by the Magic.

Aaron Gordan took charge, hitting three treys and putting up 13 points in the quarter while also showing out on defense.

The Magic jumped out to a 20-point lead, and a 12-3 run to start the fourth quarter brought the starters off the floor for the Magic. However, the veteran-led Spurs came storming back.

They went on a 25-6 run, and a Pau Gasol three-pointer cut the lead to just five points with less than a minute left.

However, this wasn’t enough time for Greg Popovich’s team, as the Magic were able to hold on and take the victory 117-110.

Players That Stood Out

Mo Bamba recorded the first double-double of his career, scoring 12 points while pulling down 11 rebounds. He also recorded one block.

For the Spurs, DeRozan carried the team, scoring 25 points with 7 rebounds and 5 assists.

The Magic are back at home tonight to take on the Cleveland Cavaliers at 7 p.m.

The Spurs get a couple of days off before heading to Miami to play the Heat.

Jonathan is a sports journalism student at the University of Florida. He enjoys videography, editing, photography, and writing.
Previous Dolphins Defense Forces Four Turnovers to Beat Jets 13-6
Next SEC Divisions Clinched, Alabama in League of its own