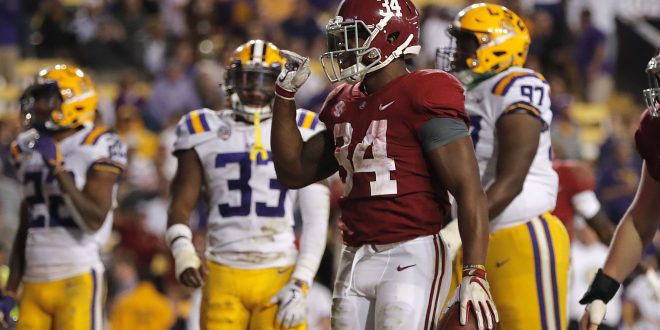 Alabama running back Damien Harris (34) waves goodbye to LSU fans after his touchdown in the second half of an NCAA college football game against LSU in Baton Rouge, La., Saturday, Nov. 3, 2018. Alabama won 29-0. (AP Photo/Gerald Herbert)

It was another crazy, unpredictable, and exciting weekend in college football. Scoring in the final minutes to put teams ahead, an SEC shutout, blowouts, and more all over the country in week 10. Check out these key games.

One of the most talked about and hyped games this past weekend was the annual Bama/LSU showdown. Unfortunately for the Tigers, the Tide lived up to their name and rolled right over them. Alabama came into Death Valley and charged on shutting out LSU 29-0. Coming into this weekend’s matchup, Bama had won seven straight games against the Tigers. Now, they can tack on another W and extend it to eight.

“We really wanted to make a statement,” Alabama head coach Nick Saban said after the game. “To shutout this team is really a pretty significant accomplishment.”

Next up: Alabama will host Mississippi State for a 3:30 p.m. start this Saturday, while LSU hits the road and takes on the Arkansas Razorbacks at 7:30 p.m.

Clemson had another impressive performance on Saturday when they toppled Louisville 77-16 to keep their undefeated season alive. By the end of the first quarter, the Tigers were up 14-3, but after the first 15 minutes of the game, they really took off. They scored 21 points in the second, 28 points coming out of halftime, and 14 points in the final quarter to blow past the Cardinals.

Next up: Clemson will travel and face Boston College, where College GameDay will make an appearance, while Louisville will try to snap their six-game losing streak against ranked Syracuse this Friday at 7 p.m.

Next up: Notre Dame will host the Florida State Seminoles this weekend at 7:30 p.m., while Northwestern faces Iowa at 3:30 p.m. on Saturday.

Clemson wasn’t the only key team that blew out its opponent this weekend. Michigan blazed passed the Nittany Lions to win their eighth consecutive game. Wolverines QB Shea Patterson completed 11 of 17 passes for 144 yards and 2 touchdowns.

Next up: Michigan will travel to New Jersey to face Rutgers on Saturday with a 3:30 p.m. start. Penn State hosts Wisconsin with a noon kick-off on Saturday.

The winner of this game would snatch the SEC East and after a standout season, the Dawgs were the ones to clinch. From the very beginning of the game, Georgia held this game and didn’t look back.

With the East clinched, the Dawgs will face Alabama in the SEC title game in a month in Atlanta, GA on Dec. 1, 2018, at 4 p.m. These teams faced each other earlier this year in the College Football Playoff Championship Game where the Dawgs lost 26-23 in OT to Bama.

Next up: Georgia will host Jarrett Stidham and the Auburn Tigers at 7 p.m. on Saturday as Kentucky heads to Tennessee for a 3:30 p.m. kick-off.

The ending of this game was one for the books. Trailing by a touchdown heading into the last 20 seconds of the game, West Virginia quarterback Will Grier threw a 33-yard pass to Gary Jennings to make it 41-40 with just 16 seconds remaining in the game.

A field goal and tie or a two-point conversion and win by one? WVU opted for the latter. Grier found Davis Sills in the end-zone and made it. HOWEVER, Texas called a timeout right before the snap so the play was dead. Now, he would have to do it again. And he did. Grier ran it in himself and got the two points that put his team ahead of the Longhorns for a final score of 42-41.

Grier completed 28 of 42 passes for 346 yards with three touchdowns. Now, the Mountaineers are back in the AP Poll’s top-10 sitting at No. 7.

Next up: West Virginia will host TCU for a noon kick-off on Saturday with Texas traveling to Lubbock to take on the Red Raiders at 7:30 p.m. this weekend.

A team with a losing record led Ohio State going into halftime. Yes, you read that correctly. The Nebraska Cornhuskers came out of the gate Saturday hungry for a win. And they were close at one point. Before halftime, Nebraska took a 21-16 lead and that score held until Ohio State got a touchdown early in the third.

The Huskers got close again toward the end of the game, but Ohio State held them off to win 36-31.

Even though the Buckeyes kept a close scoring game with an unranked team, head coach Urban Meyer was still impressed with his team’s performance against Nebraska.

Next up: Ohio State travels to Michigan State for a noon start on Saturday, while the Huskers host Illinois for a noon kick-off as well.