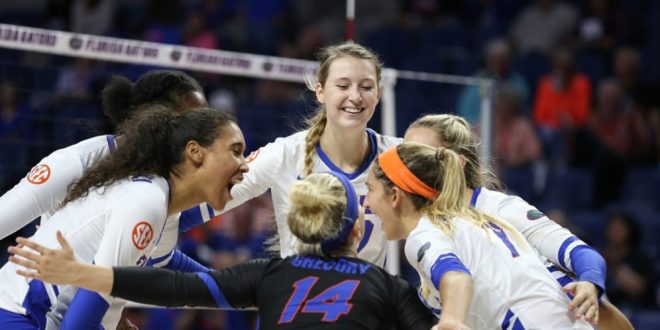 The Florida volleyball team got back on track Sunday with a win that put them among elite company.  The 11th ranked Florida Gators (20-5, 11-2) rebounded from being swept on the road by 12th ranked Kentucky as they took down the Arkansas Razorbacks (10-12, 4-8) 3-1 in a Sunday afternoon home match.  After dropping the match’s first set, the Gators responded by taking the next three frames to earn the victory.

“It feels like the forever since we’ve played last so it was good to come back to the O-Dome and really find our rhythm,” senior setter Allie Monserez said.

Gators Showing Out on Offensive

Paige Hammons led the way with a career-best 16 kills; her previous best was 13 against the Georgia Bulldogs. Hammons was productive in almost every facet with four service aces, 10 digs and four blocks.

After a career-high # of kills, @paige_hammons sits down with the SEC Network to talk about the Arkansas victory! #GoGators pic.twitter.com/ZIwaX3DlY3

“Mary got us together in the second set and told us to play for one another,” she said. “We wanted to play especially hard for Allie Monserez and Taelor Kellum with this being their senior season.”

Those seniors brought their own production as well. Kellum was second on the team in kills with 12 and no errors for .632 hitting percentage along with seven blocks.  Allie Monserez spread the ball all around the court as she tallied 44 assists and even provided two service aces.  Middle blocker Rachael Kramer and outside hitter Mia Sokolowski threw their hats into the ring too. Both had 10 kills in the match.

“We got a lot of good play by different players tonight,” Wise said. “At this point in the season, we need to have the ability to score points at every position, in every rotation and tonight we did that.”

Florida joined the ranks of Nebraska and Penn State on Sunday as programs since 1984 that have won their 1,000th program win.

Mary Wise is responsible for 844 of those wins and Hammons said it was great to earn something like that with the squad they have.

“It means we had some really talented players that were here long before I got here,” Wise said. “We’ve joined the club of Nebraska and Penn State in terms of wins. That’s pretty good company.”

The Gators will look to make 1,001 this Sunday in an afternoon road match against the Auburn Tigers.