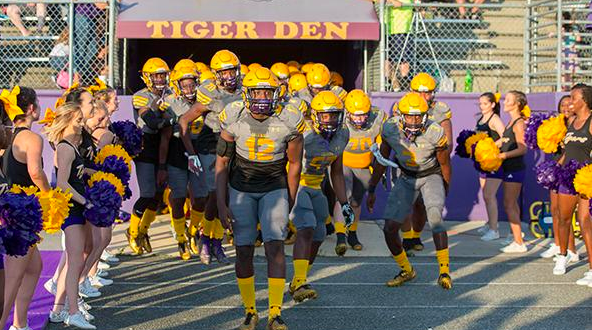 The Columbia Tigers varsity football team ended their regular season as the first in Class 7A, with a 9-1 overall record. They also entered the high school football playoffs as a #1 seed.

The Regional Quarterfinals are officially underway as the Tigers will take on the Fletcher Senators this Friday at 7:30pm. The Senators are currently an 8th seed in the playoff with a 7-3 record.

This will be the second time that Columbia and the Senators will be facing each other this season. The first time these teams played each other was on October 19th, when Columbia narrowly came out with a win. The Senators and the Tigers held a tied score throughout the first three quarters of the game. Columbia was able to clinch the win during the fourth quarter, winning the game 21-20.

Columbia’s head coach Brian Allen, says they underestimated them at the time.

Not only are the  Columbia Tigers currently ranked first in their class, but in the state of Florida overall the Tigers are impressively ranked 6th, while the Senators stand at 45th.

this friday we have the first round of playoffs in the jungle against fletcher high school. this game will be a WHITE OUT game so wear white!!

For the Tigers, they are 4-0 in their district, 6-0 at home and 3-1 away. Unlike the Senators, the Tigers manage to kick off the first quarter of their games with a high scoring average of 11.3, rising to a 13.3 in the second quarter. The Tigers scoring average eventually drops to a 6.9, but keeps an overall average of 40.1.

Both teams are heading into tomorrow’s game with the hopes of advancing to the regional semifinals. The tigers head coach Brian Allen, explains the mindset of the team going into this Friday’s game.

The winner of the game will advance to the regional semifinals on November 16th, and play the winner of Hagerty vs. Lee High School