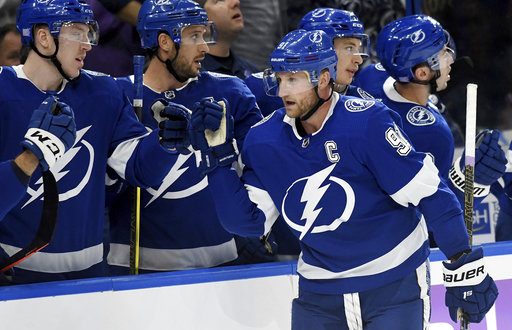 The Tampa Bay Lightning (11-3-1) are looking to ride their current hot streak as they host the New York Islanders (8-4-2) Thursday night at Amalie Arena. The Islanders, meanwhile, will be hoping to bounce back from their most recent loss that ended a five-game win streak.

View From the Top

The Lightning have won four of their last five games, which has moved them to the top of the Atlantic Division. The team’s surge in offense has been a big reason for their success.

Brayden Point leads the team in scoring with nine goal and 19 points. But, Nikita Kucherov and Steven Stamkos have begun to heat up. In the past six games, Stamkos has scored four goals and Kucherov has had three multi-point games.

On what's working with him and Stamkos: "Just pass to each other, look for each other, get open for each other. That’s important to this game, and that’s what we’re doing."#EDMvsTBL | Nikita Kucherov: pic.twitter.com/zE25RSfDdK

In addition, seven Lightning players are already in double digits in scoring. The contribution from several different guys has gone a long way so far this season.

“When you get the scoring through the lineup, it’s just a confidence builder for the players that are used to scoring and they’re feeling good about themselves,” Lightning head coach Jon Cooper said. “Everybody’s kind of chipping in in the way you need, in the way the team’s built. When everyone is feeling good about themselves whether it’s the penalty kill guys or whatever, it’s just a good recipe and that’s what’s been happening.”

Thursday night’s contest will be missing two key pieces from the Lightning roster. After missing almost two weeks, Victor Hedman returned to practice on Wednesday, but the defenseman will not be on the ice when the team takes on the Islanders.

Forward Ondrej Palat will also be missing more time with a lower-body injury.

While Tampa has been winning games with their offense, New York has been doing it on the defensive side. In their 14 games this season, the Islanders have allowed two or fewer goals seven different times. With such sound defense, they’ll now be looking for more offense when they face off against the Lightning.

Game time for the Lightning and Islanders is set for 7:30 p.m. The game will be broadcast on Fox Sports Sun.