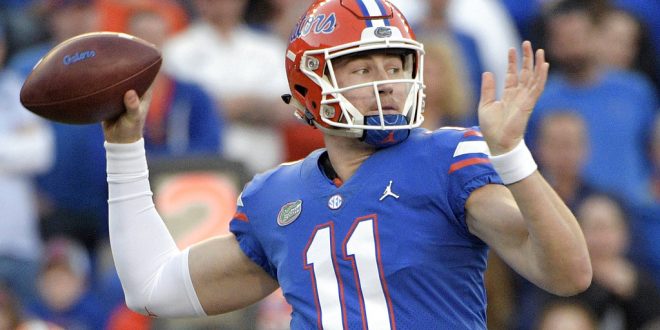 On Wednesday, according to Thomas Goldkamp of 247 sports, Florida quarterback Kyle Trask suffered an injury in practice. Trask was reportedly carried off the field.

Trask’s father posted on Facebook that his son injured his foot while running a trick play. However, the University Athletic association or anyone associated with the Gator football program has yet to comment or confirm the situation.

What this injury does mean regarding the quarterback position? There’s also Feleipe Franks, the current starter who hasn’t exactly performed up to par.  Freshman Emory Jones has played in a few games, but he can only play in two more this season before having to burn his redshirt. Florida coach Dan Mullen said earlier this week all the quarterbacks would be evaluated in practice. Each player’s performance this week would be the guideline for Saturday’s game plan.

Who is Kyle Trask?

Trask, a redshirt sophomore played in the Missouri game heated up the quarterback competition after the Missouri game.  Although Florida fell to Mizzou 38-17, Trask finished 10-18 passing for 126 passing yards and a touchdown.

Man….. I feel so damn bad for Kyle Trask. Show him your support #GatorNation

With the dissatisfaction of Franks’s performances, Gator fans were looking to rally around Trask. They hoped to have him as the starter for Saturday’s game against South Carolina.

Trask isn’t a stranger to injuries. He missed the 2017 season with a foot injury. Trask, out of Manvel High School in Texas was a three-star recruit. He wasn’t even a starter in high school and starting at Florida would’ve been his first start in years.