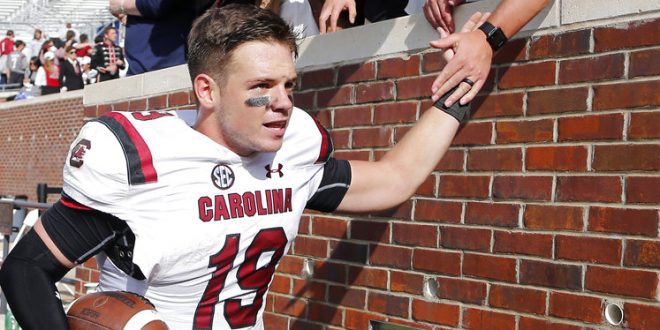 On Saturday, the South Carolina Gamecocks travel to Florida to take on the Gators.

The two teams come into the game in different situations; the Gamecocks are riding a two-game winning streak while the Gators are trying to bounce back from two straight losses.

Here is a preview of this SEC East matchup from South Carolina’s perspective:

Gamecocks’ signal caller Jake Bentley has had a couple of bumps on the road this year.

The junior’s season features a couple of games with more interceptions than touchdowns. He was even forced to miss the team’s fifth game due to a knee injury.

In the past couple of weeks, however, Bentley has responded with impressive performances. Against Ole Miss and Tennessee, he put up a total of 515 passing yards with four touchdowns against just one interception.

Todd Ellis, South Carolina’s play-by-play announcer, believes the team is at its best when Bentley is on-target and throwing the ball down the field:

A strong game by Bentley could be a catalyst for the Gamecocks coming out with a win on Saturday. Against Florida’s depleted secondary, quarterbacks Jake Fromm and Drew Locke torched the Gators with a combined 490 passing yards and seven touchdowns in the last two games.

Besides the necessity for Bentley to drive the ball down the field, it is important for the other side of the ball to step up as well.

South Carolina has been in the middle of the pack in scoring defense, allowing 27.9 points per game. With Florida averaging 30 points per game, the Gamecocks will have the tough challenge of keeping Florida off the field.

While Muschamp has not liked what he’s seen from this group in 2018, he is hoping that some younger players can make an impact on Saturday:

Four freshmen (Jaycee Horn, Jaylin Dickerson, Israel Mukuamu, and R.J. Roderick) are expected to see some sort of playing time in the secondary.

Winning in the Swamp

Muschamp is seeking to become the only South Carolina head coach not named Steve Spurrier to come out of The Swamp victorious. The Gamecocks have only won twice in Gainesville, with those wins coming in 2010 and 2014.

The last time South Carolina played at Florida was in 2016, when it lost 20-7. Despite the fact that Muschamp’s group of players has matured in those two years, the coach noted that he still has youth on his roster:

Along with potentially making history this weekend, Muschamp could also improve their fortunes for this season. The Gamecocks (5-3 overall; 4-3 SEC) are currently out of contention for the SEC East crown, but the program is still vying for a solid bowl bid.

Previous Packers look to bounce back from loss when they host Dolphins Sunday
Next High School Football: Pensacola Catholic vs. Fort White Quarterfinal