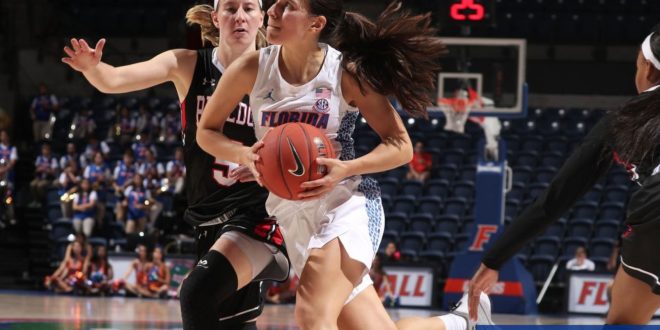 The Florida women’s basketball team fell 63 to 56 in a hard fought battle against the Florida State Seminoles on Sunday in Tallahassee. Redshirt senior Funda Nakkasoglu led the Gators, scoring  21 points, including six from beyond the arc. Delicia Washington added 11 points shooting 5-for-6 in the final quarter.

“Coming into the match up, we obviously knew this was going to be a really tough place to play and I’m proud of the way we handled the adversity today,” Gator coach Cam Newbauer said.

Florida came out strong in the first half

The Gators came into the Donald L. Tucker Center on Sunday noticeably more aggressive than last week’s matchup against Gardner Webb. In the first quarter, freshman Kristina Moore hit a three to put the Gators on the board and the team took off from there. Florida held the Seminoles to just 3-of-16 shooting while the Gators shot 50 percent in three-pointers to extend their lead to 15-8 at the end of the first. That momentum continued into the second quarter. Nakkasoglu ended the half with nine points for the Gators and this was the first time the Gators took the lead going into the half (28-27) against the Seminoles since 2011.

Night and day in the second half

Valencia Myers lit the offense on fire for the Seminoles in the third quarter. In a span of three minutes, Myers single-handedly put the Seminoles in the lead, 33-28. Myers ended the game with 13 points and Nausia Woolfolk added 10. Kiah Gillespie also proved to be a fierce competitor putting in 19 points and nine rebounds during Sunday’s matchup. Gillespie connected 12 of those points in the second half.

Florida State’s defense held the Gators scoreless for over half of the third quarter until Nakkasoglu hit a three-pointer with 4:07 left in the third. With a burst of energy, the Gators went on a 7-2 run to close the gap to just 44-40, going into the fourth.

The Gators scored 16 points in the fourth quarter, the highest offensive output in all quarters. While the Gators closed the gap 62-56 with under a minute left to play, offensive rebounds allowed Florida State to close out the game with a win.

FINAL | FSU 63, Florida 56. Scrappy Gators hang tough till the end with the Seminoles but fall in Sunshine Showdown. Nakkasoglu finishes with a game-high 21 points including six 3-pointers. pic.twitter.com/WHGKruuu4p

Nakkasoglu and Washington once again proved their leadership on the court.

Newbauer praised Funda for her performance as she has been the leading scorer for the team in the last two games.

“Funda is a gamer and a competitor. She wants the ball in her hands and even when she is defended well she can find ways to score baskets,” he said.

“She wants to do so well for her team and for herself that sometimes she gets frustrated. So before the fourth quarter I challenged her to put it behind her and move on. She had a great response and it was awesome to see the way she played.”

Florida improved in three-pointers during Sunday’s matchup, shooting 36 percent (9-25). However, the Gators shot only 35 percent from the field, six percent less than last week’s 41.7 percent performance.

The Gators will be in Georgia this week as they take on Mercer on Thursday at 7 p.m.