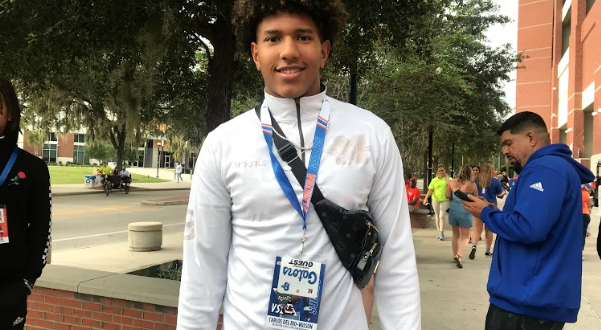 Recruits Reflect After A Big Comeback By The Gators

The Florida Gators huge 35-31 comeback win over the South Carolina Gamecocks had a big impact on the recruits visiting. Also, next week when the Gators face Idaho it’ll be the last game day for Florida’s recruiting during the 2018 season. Early signing day is December 19th-21st.

Carlos Del Rio was impressed with Gator Nation during the game.

The Quarterback has been forming a bond with Florida Head Coach Dan Mullen and QB Coach Brian Johnson.

Del Rio really believes he could learn valuable techniques from Johnson. He likes the spread offense the Gators run because Del Rio wants a team to utilize his arm in college.

Florida is one of his top 5 schools and Del Rio might come to next week’s game against Idaho.

Brayden Monday said after the game that he enjoyed the atmosphere in the Swamp and liked watching the defense.

Monday thinks Florida has good pass rushers and believes he can fit into the Gator defense really well because of his build and speed.

He’s not planning to enroll early but he does plan on signing early.

Quashon Fuller is currently an FSU commit. However, he says his recruit is still very much open.

Fuller enjoys watching Polite because of how versatile he is on plays and how he plays at multiple positions, which is something Fuller would like to do as well. The Gators have talked to Fuller about being an edge rusher and he really seems to like the defense the team runs.

The coaches message to Fuller is that they want him to come to help the Gators win a championship.

Fuller is planning on going to the UF vs FSU game in Tallahassee in two weeks. All of his Official Visits will be in December and he is planning to visit Miami, FSU, UF, Alabama and Auburn.

There were other very notable guys in attendance for Saturday’s game:

Follow me on Twitter @SarahCarlieUF or Instagram @sarahcarlie
@SarahCarlieUF
Previous Florida Football Back to Winning Ways, Take Down SC 35-31
Next Florida Women’s Basketball Falls to Seminoles 63-56