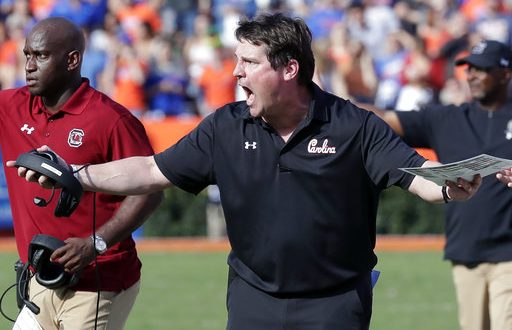 The South Carolina Gamecocks are probably excited to come home. After all, they suffered an absolute meltdown in Florida last weekend that puts the team in a tough position.

Is Will Muschamp on the hot seat?

The easy answer is yes. A sense of uneasiness currently permeates the air after optimism shrouded the team early in the year.

South Carolina now sits fourth in the SEC East. That has to feel like somewhat of a disappointment to the Gamecocks, as this was supposed to be their year. Instead, both Florida and Kentucky have been better than advertised and pose more of a threat.

A win against the Gators in Gainesville last week would have been a huge boon for the team. The Cocks were up 17 with just a few minutes remaining in the third quarter. Then UF buckled down and scored 21 unanswered, and USC has more questions than answers.

Is Will Muschamp really on the hot seat? No. But the seat should be getting warm. The team finally has a legitimate offense – its averaging 411.4 total yards and 31 points per game – yet its defense is now falling apart. It seems like Muschamp can’t find a happy medium.

Currently sitting at fourth in the division at 5-4, patience won’t hold in Columbia too much longer.

Will South Carolina cover the spread?

Let’s be honest here, in all likelihood, the Gamecocks are going to win this game ugly. A loss here would be devastating and probably end Muschamp’s career, similar to how it went down in Florida against Charleston Southern in 2013.

But South Carolina currently sits as a 30.5-point favorite. The question should be whether or not the Cocks cover the spread or not. Quarterback Jake Bentley looked comfortable for the first three quarters against an adequate Florida defense and should have no problem rolling over the Mocs.

Expect South Carolina to come out with a passion Saturday evening at 7:30 p.m.

Chris O'Brien is a rising sophomore at the University of Florida. He aspires to be an on-air sports anchor someday.
Previous Kentucky Looking Past Blowout Losses Heading into Final Home Game
Next Gators Pull Away Late in Victory Over La Salle