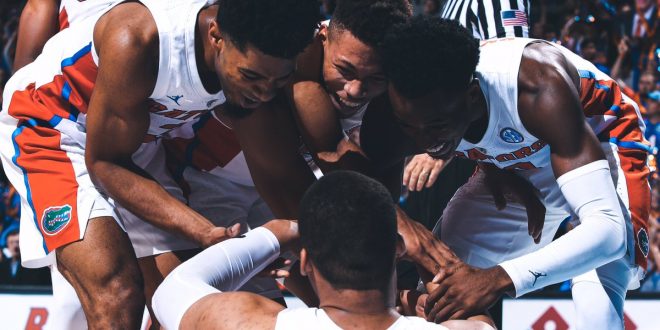 Gators Pull Away Late in Victory Over La Salle

The Gators struggled to create any legitimate separation in the first half, but jumped out to a 23-point lead in the second half after a 17-1 run. They maintained a large lead until Florida coach White removed the rotation players with a few minutes left in the game. La Salle ended the game on a 11-1 run.

Getting Downhill and Owning the Interior

Coach White mentioned that the Gators had become way too reliant on jump-shooting in the first two games of the season. This was certainly not the case on Wednesday night. The Gators came out attacking the rim with authority which helped them jump out to an eight point lead at the half.

The Explorers are a severely undersized team who have struggled with their interior presence. The Gators took complete advantage of the size difference and made it their goal to own the interior. They finished with 46 points in the paint, largely in part to Kevarrius Hayes and Keyontae Johnson.

Mike White discussed how getting the ball in the paint has been a constant theme for his team.

All Three Freshman Are Officially in the Rotation

There were numerous questions heading into the season regarding how Mike White was going to balance out his rotation. The rotation is finally rounding into form and one thing is clear: all three freshmen are receiving quality minutes.

Andrew Nembhard is undeniably the most impactful freshman for the Gators. He has averaged 7.7 points, 5.7 assists, 2.7 rebounds and 2.0 steals in a team-high 30.0 minutes per game; his playmaking ability is elite and he hasn’t had any trouble adjusting to the the size and speed of college ball.

Keyontae Johnson has also carved out a nice role for himself in the rotation. He has been one of the first men off the bench every game and finished with 12 points, three rebounds and two assists in 21 minutes against La Salle.

Johnson discussed how his confidence has grown and how he plans to improve moving forward.

Even though Noah Locke struggled with three points on 1 of  4 shooting and a turnover in 12 minutes of action, he will undoubtedly see quality minutes when he starts to consistently knock down his threes.

Unlike their previous two games, the Gators did a fantastic job of sharing the ball and finding the best available shot. Nine different players scored at least four points. They also added 30 points off of turnovers and 39 bench points, both of which are season highs. The Gators weren’t forcing any tough, contested shots and were letting the game come to them. Mike White has been preaching patience and ball movement all year. To his liking, this finally came to fruition on the court.

The Gators have struggled mightily from beyond the arc this year. In their first two games, they shot a combined 14-52 (26.9%) from three. They didn’t do any better against La Salle, finishing an underwhelming 3-13 (23.1%). Florida has an abundance of three point shooters, so it shouldn’t be long until they start consistently knocking them down.

The Gators will head to the Bahamas to compete in the Battle 4 Atlantis. They will be facing Oklahoma on Wednesday, November 21 at 12:00 p.m.