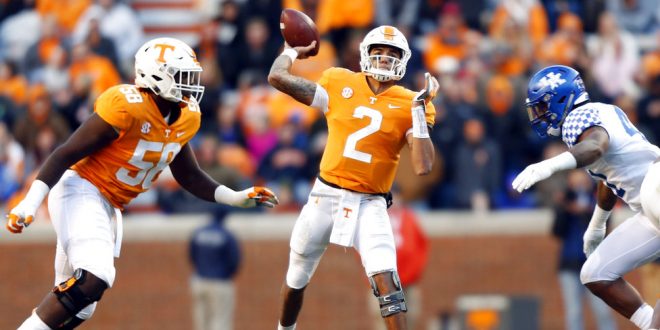 FILE -- In this Nov. 10, 2018, file photo, Tennessee quarterback Jarrett Guarantano (2) passes against Kentucky during an NCAA college football game in Knoxville, Tenn. Guarantano has thrown a school-record 146 consecutive passes without an interception. His growing confidence has helped Tennessee move one win away from bowl eligibility a year after a 4-8 season. Tennessee can become bowl eligible Saturday by beating Missouri in its home finale. (AP Photo/Wade Payne, File)

It’ll be a slow weekend in the Southeastern Conference. Across the board, none of the six ranked teams will play a fellow ranked opponent. In total, only three conference games will take place this weekend.

One of them, Missouri vs. Tennessee, will be the featured SEC game this weekend on CBS.

The Volunteers – coming off a home upset win over the then-11th ranked Kentucky Wildcats — will look to continue their winning ways. A win this weekend over the Tigers would give Tennessee bowl eligibility for the first time since 2016.

In head coach Jeremy Pruitt’s first season, the milestone could be huge for his squad and give a much-needed bolster to the program.

As for the Tigers, they’re already enjoying the feeling of bowl eligibility. Their win against Florida two weeks ago and a close game against Vanderbilt has the Tigers dancing for the second straight year.

It’s no secret to the SEC that Drew Lock is a talented quarterback. Even UT’s head coach knows that, heard below.

Gator fans saw it first-hand at Ben Hill Griffin Stadium when he torched the coveted “DBU” for over 250 yards and three touchdowns. The Commodores saw it last weekend when Lock battled through two interceptions and led the Tigers to victory.

The Tigers have shown their teeth over the last couple of weeks. The way Missouri has played makes head coach Barry Odom believe this is the best his Tiger team has been in recent memory.

Multiple times during the SEC teleconference on Wednesday, Odom gave credit to his offensive line and the growth out of them this season. Not only has the unit given time to Lock to make his throws, the front five has also opened up the running game, allowing the Tigers runners to break free into the second level.

During the Tigers two-game winning streak, the legs of Missouri runners have combined for 474 yards on the ground, a testament to the offensive line’s recent play. The running game, and the play of the front five, should help the Tigers on Saturday against Tennessee’s 55th-ranked run defense (152.7 YPG).

While the seniors will be the story of the show on Saturday, the focus should be on a redshirt junior.

One last Run Through The T.

Darrell Taylor — a 6’4 linebacker with size and speed — has wreaked havoc on opposing offenses at various times.

Last week against the Wildcats, Taylor had his best game of the season. The linebacker had four sacks on Terry Wilson, the speedy and shifty Kentucky quarterback. He also contributed six solo tackles, four of them for a loss. He also forced Wilson to fumble late in the game, recovering it himself to end a Wildcats drive in UT territory.

Totaled four sacks, one forced fumble, one fumble recovery and seven tackles.@darrelltaylorst is the #SECFB Defensive Player of the Week. pic.twitter.com/RusGevVkkx

While consistency has been Taylor’s problem this year, a Player of the Week award could pay his confidence dividends. Heading toward the end of the season, solid performances from Taylor could provide Pruitt relief on the defensive front.

The Tigers and Volunteers will be featured on CBS as the SEC game of the week. You can catch the action between the two squads at 3:30 on Saturday afternoon.

Previous Gators Women’s Basketball Cannot Complete Comeback, Loses to Mercer
Next Bucs look to pick up must needed win against the Giants