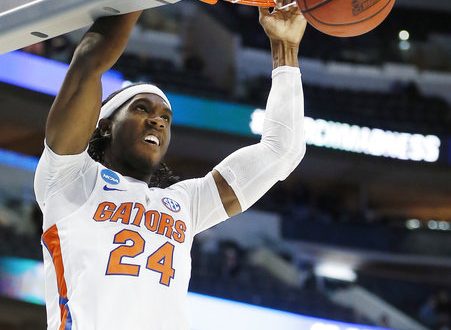 The Florida Gators men’s basketball team took care of business against the Stanford Cardinal on Thursday night, winning 72-49 in dominant fashion. The Gators turned in a top-notch performance on both sides of the ball, shooting 47% from beyond the arc, while forcing 20 turnovers in a defensive performance Florida will look to build off of on Friday. Deaundrae Ballard led the team offensively with 19 points. KeVaughn Allen added 13 points and 4 steals.

15 steals tonight for the #Gators.@K5allen1 led the way with 4.
Keith Stone & @keyontaejohnso1 with 3 a piece. #Defend pic.twitter.com/ZIi3oRHMDZ

There’s no way around it: the Stanford Cardinal offense has struggled all year. Coming into this game, they were shooting just 41.7% percent from the field, 31.4% from three and averaged 14 turnovers per game. With that said, the Gators had themselves a great defensive performance on Thursday night. The energy and effort was evident all night, with players diving for loose balls and playing aggressive on-ball defense. The full-court press helped slow down Stanford’s offense, limiting their ability to get into their sets. KeVaughn Allen had a shutdown performance and came up with 4 steals to lead the team. As a squad, the Gators came away with 15 steals, 3 blocks and forced Stanford into 37.2% shooting from the field and 20 turnovers.

Deaundrae Ballard continued his offense tear in the win. He was the first player off the bench for Florida in both halves. Ballard played 24 minutes and scored 19 points on 7-12 shooting (3-5 from three.) He also tallied 2 steals. He showed played with a high motor all night and helped the Gator offense get going when the team was struggling to score in the opening minutes. Ballard had his best game as a Gator, hitting his career high in points, minutes played, three-pointers, and made field goals. If he keeps playing like this, it’s safe to say Ballard will have a key spot in the rotation moving forward.

Florida’s offense looked much better in this game than they had overall this season. Coming into Thursday nights contest, the Gators had struggled with ball movement, three-point shooting, and turnovers. This was a promising showing for the team. They shot 51.8% from the field and hit 7 of their 15 attempts from three.

The Gators were aggressive in attacking from the basket. However, the team still isn’t as far along as they would like to be. They only had 10 assists in the win, which is their second-lowest total of the season. They settled for some bad shots and the ball stuck on offense at times, especially in the first half.

Noah Locke got his first start of the season over veteran Jalen Hudson against Stanford. Hudson had been struggling this season, averaging just 10 points a game on 35% shooting from the field and 22% from beyond the arc. The senior guard played just  7 minutes on Thursday night. He didn’t take a single shot and finished scoreless.

Andrew Nembhard had another solid all-around performance for the Gators, finishing with 8 points, 5 assists and 2 steals. He looked poised while running the offense and helped the team develop a rhythm. Locke, in his first career start, provided decent floor-spacing and energy. He scored 11 points and hit 3 three-pointers. He also added 2 rebounds and 2 assists.

The Gators’ next game will be Friday night at 9:30 PM ET on ESPNU against the winner of Butler-Middle Tennessee State.