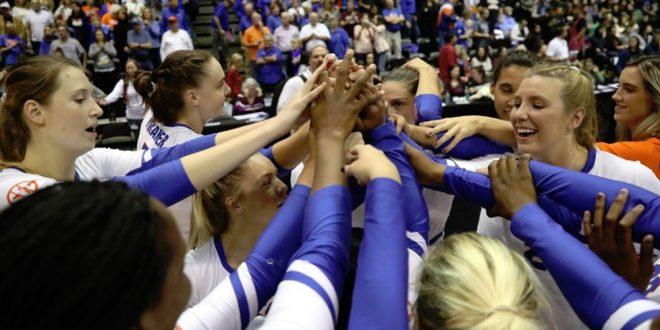 The Seminoles sent the Gators home early the last time these teams met in the postseason. Florida made sure history didn’t repeat itself Thursday evening.

“I think that’s one of our best performances of the year,” Associate Head Coach Dave Boos said.

He said a big part of Florida’s performance was their ability to stay “in attack mode.”

Boos on the importance of staying aggressive:

“This was one of our most complete performances all season,” Head Coach Mary Wise said. “One of our goals has always been to be playing the best volleyball at the end. Tonight was the perfect indication of how this team has grown and evolved.

At times, even after wins, Wise has pointed out the team’s lack of getting great production in every facet of the match.

Dominating in Every Facet

The Gators outpaced Florida State in what seemed to be every major category:

Boos credited Florida’s work at the service line and in the front row as the reason for successfully limiting Florida State’s offense.

“We frustrated them,” he said.

Boos said the practiced avoiding the libero “at all costs” in the week leading up to the match.

He referred to Seminole outside hitter Payton Caffrey as a special athlete and her ability to mix up her attacks gave the Gators trouble up until the last set of the match. Boos said the team adapted as the game went on, and Florida’s serving gave them enough time to make those adaptations.

Paige Hammons had herself a day on the attack for the Gators by recording 16 kills on 33 swings for a .455 hitting percentage.

Rachael Kramer made her presence felt in the match as well. She threw in nine kills on 18 attempts and nine blocks.

“By the end, they were trying to triple-block Rachael,” Boos said. “She was that kind of threat and they knew it. They just couldn’t find a way to slow her down.”

He commented on Thayer Hall’s impressive match despite it being only her second one since sitting out multiple with an undisclosed injury.

Her absence resulted in Hammons having to shoulder more of a load at the pin. With her back, it can make for a deadly combo now that Hammons has the ability to take over matches.

“The growth that this team has done, both individually and collectively, is far more important than the number,” Wise said.

Florida is back in action Friday night with a 7 p.m. match against FGCU.