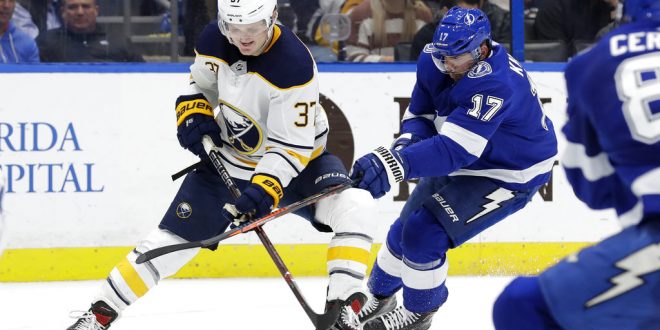 If the Sabres won Thursday’s game they would have been the first, in franchise history, to win 11 straight games in a row.

The Tampa Bay Lightning crushed the Sabres dreams of that happening though in a 5-4 win Thursday night.

Dan Girardi, Alex Killorn, Nikita Kucherov and Steven Stamkos all scored for the Lightning last night. With 5:41 left in the game Cedric Paquette scored the 5th goal to break the tie and end the Sabres 10-game winning streak.

Could this be the start of something new? A Lighting vs. Sabres rivalry?

These two teams won’t meet again until Jan. 12 in Buffalo. It will be interesting to see what brews up between the two teams after the Lightning crushed the reignited bond between Buffalo fans and their precious Sabres.

A look into the future:

Tampa Bay seems to be dominating their regular season once again. With the most well-known duo in the NFL, Stamkos and Kucherov on offense, there is no doubt they should go straight to the playoffs.

Doesn’t that happen every year? Lightning fans hype up the regular season only to be let down in the playoffs. However, this year might be different. The Lightning’s weakness has always been their defense. Obviously, with Victor Hedman defending and a rookie that could potentially steal the show: Erik Cernak.

Defenseman Anton Stralman has been absent from the rink due to upper body injuries. Cernak appeared in his first game in a Lightning jersey on Nov. 13 to fill Stralman’s position. This 21-year-old rookie has played in every game since.

Cernak has already adjusted to the tempo and is doing a great job filling the right side. If the Lightning can finally secure their defense, this might be their golden ticket to winning the Stanley Cup.